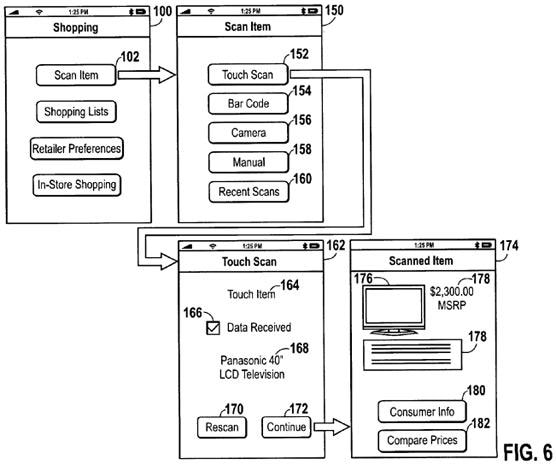 Apple has been filing more than its fair share of NFC-related patents, but it was just granted what could be one of its more important wins at the USPTO. The design for an "on-the-go shopping list" app would help buyers find and pull the trigger on deals through every tool an iPhone has at its disposal, whether it's taking a snapshot of goods with the camera, punching in the UPC code by hand or tapping an item for an NFC-based "touch scan." We'll admit that we're a bit disappointed at how NFC is used, however. As with an earlier filing, the very short range wireless is kept largely to price comparisons and adding products to a list for a purchase from a store clerk later on, rather than closing the deal outright as we've seen with Google Wallet. The original 2008 filing date will also have seen a lot of water flowing under the bridge; there's no guarantee that any enthusiasm for NFC from the iPhone 3G era will have transferred to the present day. Accordingly, we would be careful about drawing any connections between iOS 6's Passbook and Apple's ideas from four years ago -- even if Apple has regularly been a never-say-never sort of company.