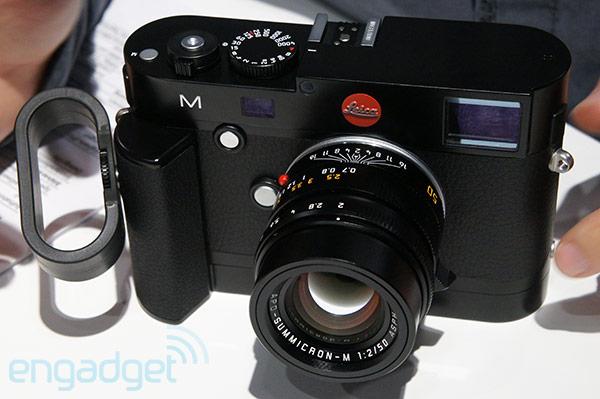 Yesterday, Canon stole the show, but today's darling of Photokina appears to be the just-announced Leica M camera. Show attendees flocked to the "new M" demo counter this morning, nudging through the crowd for a chance to check out Leica's first live-view equipped M. This new feature is powered by a new 24-megapixel CMOS sensor, and also enables 1080p video capture at 24 and 25 frames-per-second -- another first for Leica. Live-view and HD video shooting may not seem like banner features for a €6,200 (about $8,100) camera, but considering they've never been offered before, these additions seem to be highlights for hopeful M10 owners.

The camera itself is quite beastly, in typical M fashion, and appears to have just as much heft as the M9. There's a new Gorilla Glass-equipped 3-inch, 920k-dot display, that's plenty sharp and quite responsive in live-view mode. Adjacent to the display, you'll find a new LV button, which, as you may have guessed, launches the new realtime display mode. There's also a playback button, along with direct access to ISO, image deletion and menu settings. Up top, there's the Leica trademark shutter speed dial (aperture control is on the lens), letting you select from bulb all the way through 1/4000 second. There's a full-size hot shoe up top with an accessory connector for the EVF 2 attachment, and a second proprietary connector on the bottom to interface with the accessory grip, which adds USB connectivity and built-in GPS.

We can't comment on image quality just yet, but there's no question that the "new M" marks Leica's commitment to finally bring otherwise commonplace features to its popular (and pricey) rangefinder line. Look for this latest model to hit stores in early 2013, but you can take a closer look today in our hands-on gallery below and video demo after the break.

Update: This post originally stated that the new Leica M had yet to be named, however the company has confirmed that the new camera will simply be named, "The Leica M," without numbers. "The Leica M also marks the beginning of a new era in the Leica product naming policy. In [the] future, Leica M and S model names will omit the number suffix to emphasize the enduring and long-term significance of the respective systems." In this article: camera, cameras, hands-on, leica, leica M, Leica M series, Leica M10, LeicaM, LeicaM10, LeicaMSeries, M series, M10, MSeries, new M, NewM, photokina, photokina 2012, Photokina2012, rangefinder, rangefinders, video
All products recommended by Engadget are selected by our editorial team, independent of our parent company. Some of our stories include affiliate links. If you buy something through one of these links, we may earn an affiliate commission.
Share
Tweet
Share