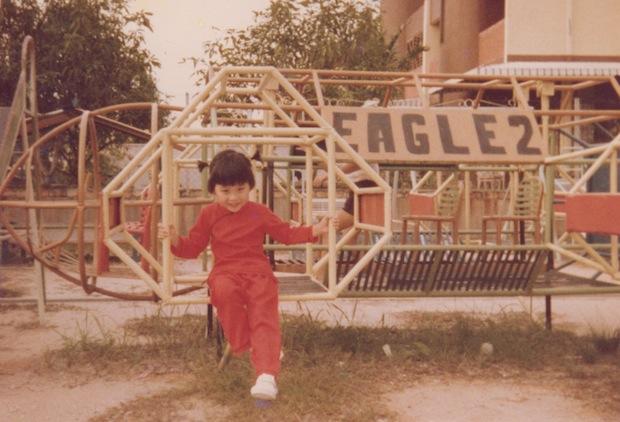 Welcome to Growing Up Geek, a feature where we take a look back at our youth, and tell stories of growing up to be the nerds that we are. This week, we have our very own Nicole Lee!

My fondest memories of growing up in Malaysia don't consist of balmy weekends by the beach or the bounty of fresh mangosteens in my grandmother's kitchen. Instead, my childhood is a blur of video games, Saturday morning cartoons, Apple Macintosh Classics, IBM PC clones, and frequent trips to the local library where my parents would leave me alone for hours. Out of sheer boredom, I read every book I could get my hands on, and a lifelong love of reading was born. Parental neglect or ingenious education tactic? You decide.

It was almost impossible not to grow up a geek in my family. As far back as I can remember, me and my cousins were into video games and computers. I remember fiddling with the Atari 2600's paddle controllers in Pong and Breakout. My cousins introduced me to the NES and I fell in love with that little Italian plumber. Then I discovered games like Doom, X-Wing (I bought my first computer joystick for this), and Dune. I wanted to be a gamer just like my cousins.

But before I could get to that point, I had to get a PC. Malaysia wasn't exactly a hotbed for Apple fanatics back in the '80s, so my father's fascination with the Macintosh was unusual. I remember feeling like a pariah when my friends visited and made fun of my adorable Color Classic and its lack of games (Although I did enjoy Lode Runner and Mahjong). I took computer classes at school, where I learned all about MS DOS, BASICA, and that cute Logo turtle. After some pressure, my dad finally got us a PC, which I used to write silly short stories on Wordstar and, of course, play video games. Early favorites include The Secret of Monkey Island and Day of the Tentacle. As we upgraded the PC over the years, I was introduced to the delight that were CD-ROMs. I was especially fond of Microsoft Encarta and, of course, the groundbreaking visual treat that was Myst.

However, I owe much of my current geeky tendencies to my high school friends, who were predominantly male. They introduced me to Dungeons & Dragons, science-fiction shows, and fantasy novels (Also to death metal, but that isn't particularly geeky). I devoured Dragonlance books for breakfast, and stayed up late to watch old episodes of Star Trek. We also shared a passion for science, which explains my early ambitions to be an aeronautical engineer (I like space. Unfortunately, my grades didn't).

I was 17 years old when I first got a taste of the internet. I still remember the banshee scream of the dial-up modem, and suddenly Malaysia didn't seem so isolated from the rest of the world. I discovered email, the world wide web, but more importantly, IRC. It was in that text-only social world where my shy and reserved exterior melted away. I was glued to the screen until the wee hours every night, making online friends that would turn into real life ones. The addiction was so bad that my mother had to disconnect my modem for months. But it was too late; I was hooked.

My love affair with the internet didn't stop when I went to college; in fact, it deepened. Shamefully, I used Microsoft FrontPage to create my first website, but I soon taught myself HTML and eventually CSS. I dabbled in online journals (before the term "blog" was coined) and figured out the various CMSes like GreyMatter, Blogger, Movable Type, and Wordpress. I was and am always eager to try new and interesting things on the internet, leaping on services like dodgeball (pre-Foursquare) and Twitter before they were cool.

One of the best and worst mistakes my parents did was give me access to their money. In college, I bought any and all gadgets that peaked my interest. They include many Palms, a Handspring Visor, a couple of Springboard modules, and a multitude of cell phones. My first phone was the Nokia 8850, which was deemed the best phone at the time. I also owned the Sony Ericsson T68i (for Bluetooth tethering), a BlackBerry Pearl, and three different Sidekicks (I loved that keyboard, plus I could telnet from it). Thankfully for my parents, I did eventually get a job or two that funded this gadget obsession.

Another big obsession of mine in college were comic books. I was always a fan of comics as a child -- I had the entire Tintin collection, for example -- but it wasn't until an ex-boyfriend lent me his collection of Sandman books that something kicked in. All of a sudden, I couldn't get enough of the stuff. I plowed through DC and Vertigo titles like Hellblazer, Fables, and Lucifer. I read books like the Watchmen, the Dark Knight Returns, great indie titles like Maus, and my comic collection grew. It was actually how I bonded with my husband when we met online -- one of our first dates was at the Alternative Press Expo, an indie and small press comic convention in San Francisco. We've since gone on many trips to the big annual comic convention in San Diego, as both visitors and as exhibitors. On one of those visits in 2003, he proposed to me at a nearby beach, just hours after I met Neil Gaiman for the first time. It was probably the happiest day of my life.

As for my career, the key turning point for me was landing an internship at TechTV. TechTV was a cable and satellite channel that focused on technology 24 hours a day, seven days a week. For a geek like myself, this was an amazing thing, and I was a huge fan. So you could imagine my jubilation when I was hired as a Web Intern there. The internship was short-lived due to the Comcast buyout, but the bond I formed with my TechTV cohorts have stood the test of time. Indeed, I would return to work with many of them at TWiT, where I tried my hand at producing for a few months.

It was because of TechTV that I knew I wanted to cover technology for a living. From there, I spent six months at Wired Magazine as a Products Intern, gathering products and occasionally writing reviews. After a brief stint at Gizmodo, CNET hired me as an associate editor in the mobile reviews category. I spent close to six years writing about phones, and it still amazes me how much they've changed in just a short time. It wasn't that long ago when the Razr was the best thing since sliced bread, and now it's all about iPhones and Androids.

Now I find myself writing for Engadget, one of my favorite gadget sites, and I feel like I couldn't be more fortunate. Technology is a fast-paced and ever-changing subject, and I like waking up to something new and exciting everyday. I find all of it fascinating, be it a smartphone-tablet hybrid or a Mars rover that shoots lasers, and I hope to be in this field for many years to come.

In this article: geek, growing up geek, GrowingUpGeek, gug, nicole lee, NicoleLee
All products recommended by Engadget are selected by our editorial team, independent of our parent company. Some of our stories include affiliate links. If you buy something through one of these links, we may earn an affiliate commission.
Share
Tweet
Share