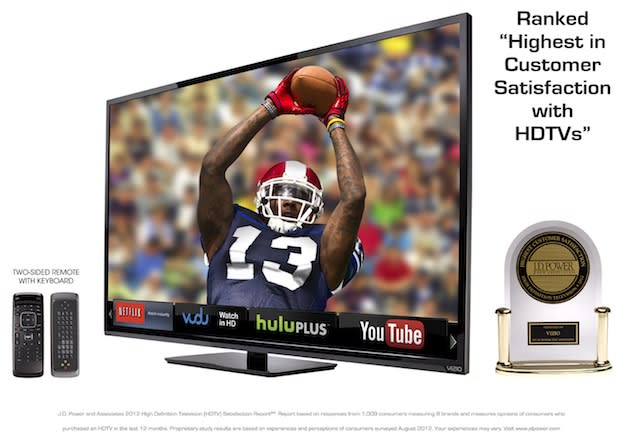 While Vizio's summer has been all about PCs, set-top Google TV boxes and even the odd ultrawidescreen HDTV, it's getting back into its usual garb for the fall. As is its customs, it's rolling out a few new HDTV models ahead of the big shopping season, which range in size from 55- to 70-inches. Other than the 58-inch CinemaWide ultra widescreen model there are also three representatives from its M-Series, with a 55-inch model for $949, and a 65-inch model that's $1,699 with 3D and $1,499 without. The other two models are in its E-Series line, and are 2D only edge-lit LED sets that feature a new thin bezel / slim frame design. The 60-inch version is priced at $999, while the 70-inch goes for $1,999. They all include the Yahoo Widgets powered Vizio Internet Apps (Netflix, Vudu, Hulu, Amazon etc.) and WiFi built in and most are already popping up on store shelves near you (just ask Logitech and Sling how that works), check out a bit more information in the press release after the break.

"The new E-Series units, which are the first of many large-size VIZIO models, give consumers access to great technology on an even bigger scale," said Matt McRae, Chief Technology Officer, VIZIO. "The larger units provide more screen space with a narrower border around the picture, allowing consumers to get the most out of the crystal-clear Razor LED picture for a more immersive, WIFI enabled experience."

Perfect for the sports fan, movie enthusiast or family looking to upgrade their entertainment centerpiece for the holidays, the E-Series 60" Razor LED HDTV is packed with the latest technologies like VIZIO Internet Apps® with WIFI, giving consumers instant access to apps like Netflix, Amazon Instant Video, VUDU™, Hulu Plus, YouTube®, Pandora®, Facebook® and Twitter®, all with the push of a button on the smart remote with keyboard.** The bigger picture of the large-size HDTVs is enhanced by crisp, high-quality LED, 1080p Full HD resolution and a 120Hz refresh rate for remarkable detail and clarity, ideal when watching a fast moving sporting event or action movie. The large 60" and 70" units also auto-adjust the picture to room lighting, feature SRS StudioSound HD™*** for an immersive surround sound experience and use less energy than conventional LCD HDTVs.****

"VIZIO's 60" (E601i) is a Smart TV with the thin LED design that consumers prefer, at a price that would have only bought you a 42" CCFL TV in October 2009," said Tamaryn Pratt, Principal, Quixel Research. "VIZIO has been able to drive the price down for consumers, allowing them to enjoy the latest features and a slim design on a larger screen, at a great value. With a 60" TV offering more than twice the screen viewing area of a 42" TV, now is the perfect time for consumers to trade up."

"For years, VIZIO has proven they're committed to providing HDTV customers with the best technology at a great value," said Tim Farmer, VP/GMM Merchandising Costco. "We are excited to offer these new large screen models to our members in advance of the holiday season."

Committed to helping consumers go big this holiday season, the following large screen models will also be new for the anticipated release for Q4:

* J.D. Power and Associates 2012 High Definition Television (HDTV) Satisfaction Report℠ based on responses from 1,009 consumers measuring 8 brands and measures opinions of consumers who purchased an HDTV in the last 12 months. Proprietary study results are based on experiences and perceptions of consumers surveyed August 2012. Your experiences may vary. Visit www.jdpower.com.

** High-speed/broadband Internet service and access equipment are required and not provided by VIZIO, Inc. Additional fees and/or subscriptions may be required for certain content and services. VIZIO, Inc. makes no warranties, representations, or assurances of any kind as to the content, availability, or functionality of third party content or services.

*** StudioSound HD is a trademark of DTS, Inc. though its acquisition of SRS Labs, Inc. in July 2012.

VIZIO, Inc. is headquartered in Irvine, California. In Q2 2007, VIZIO skyrocketed to the top by becoming the #1 shipping brand of flat panel HDTVs in North America and in Q3 2007 became the first American brand in over a decade to lead in U.S. LCD HDTV shipments. Since 2007 VIZIO LCD HDTV shipments remain in the top ranks in the U.S. and were #1 for the total year in 2009 and 2010. VIZIO is committed to bringing feature-rich consumer electronics to market at a value through practical innovation. VIZIO offers a broad range of award winning consumer electronics. VIZIO's products are found at Costco Wholesale, Sam's Club, Walmart, Target, BJ's Wholesale, and other retailers nationwide along with authorized online partners. VIZIO has won numerous awards including a #1 ranking in the Inc. 500 for Top Companies in Computers and Electronics, Fast Company's 6th Most Innovative CE Company of 2009, and made the lists of Ad Age's Hottest Brands, CNET's Editor's Choice, CNET Best of CES 2011 - Television, IGN Best of CES - Television, Bluetooth.org Best of CES, Good Housekeeping's Best Big-Screens, PC World's Best Buy, Popular Mechanics Editor's Choice and OC Metro's 10 Most Trustworthy Brands among many other prestigious honors. For more information, please call 888-VIZIOCE or visit on the web at www.VIZIO.com.

© 2012 VIZIO,Inc. The V, VIZIO, VIZIO Internet Apps, Theater 3D, CinemaWide HDTV, Full Array TruLED, Edge Lit Razor LED, 240Hz SPS, 480Hz SPS, Entertainment Freedom and Entertainment Freedom for All, and all names, logos and phrase are registered or unregistered trademarks of VIZIO, Inc. All other trademarks are the property of their respective owners. All rights reserved.

In this article: 3d, cinemawide, e-series, E601i-A3, E701i-A3, hdpostcross, hdtv, lcd, led, m-series, M3D651SV, M550VSE, M650VSE, razor led, RazorLed, via, vizio, vizio internet apps, VizioInternetApps, xvt, XVT3D580CM
All products recommended by Engadget are selected by our editorial team, independent of our parent company. Some of our stories include affiliate links. If you buy something through one of these links, we may earn an affiliate commission.
Share
Tweet
Share