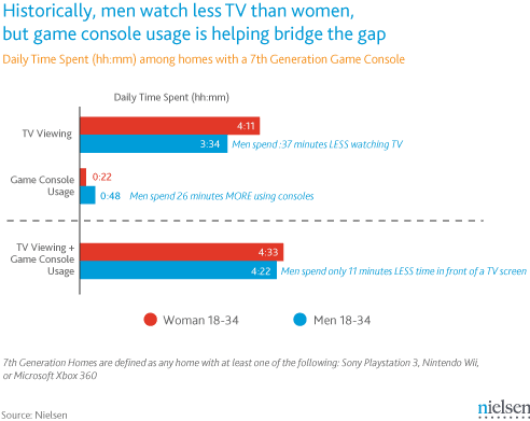 When you boil the American people down into a set of television-oriented numbers, women spend more time on average in front of the ol' tube than men, according to Nielson. Specifically, women between the ages of 18 and 34 watch an average of four hours and 11 minutes of TV per day, whereas men in that same age bracket watch an average of three hours and 34 minutes.

That's a disparity of 37 minutes, but factoring in the amount of time spent playing console games reduces that gap. Average daily console usage for women -- in this case, time spent with a 360, PS3 or Wii -- clocks in at 22 minutes, with guys pulling down more than twice as much, playing an average of 48 minutes a day. Combine all these figures together, and the gap between daily male screen-time and daily female screen-time drops to just 11 minutes: Four hours, 22 minutes a day for men and four hours, 33 minutes a day for women.

There's a lot to glean from this research, like the fact that time spent watching TV still far outweighs time spent gaming in the average American household. More importantly, however, is the fact coach potatism is a gender-neutral phenomenon, and we should all probably go for a walk or something.
In this article: gender-gap, men, microsoft, nielson, nintendo, playstation, ps3, statistic, wii, women, xbox
All products recommended by Engadget are selected by our editorial team, independent of our parent company. Some of our stories include affiliate links. If you buy something through one of these links, we may earn an affiliate commission.