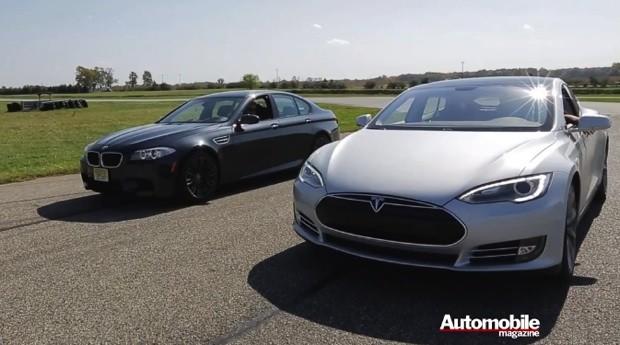 We already know from our own experience that the Tesla Model S is a driver's car, with acceleration and handling you wouldn't expect from a big and quiet luxury sedan. There's still nothing like a drag race to help settle the matter. Automobile has pitted the upscale EV against one of its more conspicuous rivals, BMW's M5, with performance results that might surprise those who would expect a 500HP, twin-turbo V8 to regularly come out on top. While we won't spoil the full results of the showdown video after the break, let's just say that even the M5's relatively wide torque band can only do so much when the Model S' electric motor is always at its peak. BMW's car may be better overall for those who want to travel long distances outside of certain routes, or to enjoy a burly exhaust note -- but there has to be a certain thrill for Tesla drivers who know they can hang with the speed kings while helping the environment.