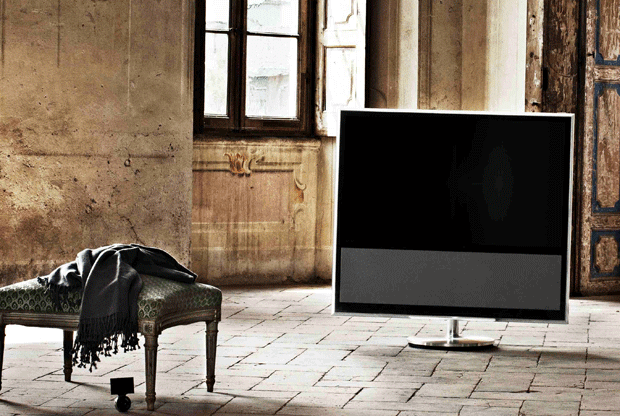 There's a new Bang & Olufsen set in town. The BeoVision 11 Smart TV gives viewers access to the Web courtesy of a browser that can be navigated via remote, iPad or Android tablet. You can also check out apps like Facebook, Twitter and YouTube on the set. There's DLNA enabled for media streaming, two USB ports, Ethernet, six HDMI sockets, six speakers and a cabinet in the back for storing your Apple TV. Aesthetically, the TV doesn't look all too different from the BeoVision 10, though the company is calling this its "most ambitious television to date." The 11 comes in 40-, 46- and 55-inch varieties and a slew of color options. You can pick one up (use your back) at B&O stores beginning today, priced at £4,995 (around $8,000). Stay tuned after the break for a press release and a video in which B&O's CEO humbly calls it the best TV his company has ever made.

Bang & Olufsen has today announced to the world their latest TV – BeoVision 11, which is the company's most inclusive and ambitious television to date.

The BeoVision 11 is Bang & Olufsen's first Smart TV, which builds on their popular BeoVision 10 design. Whilst the new model looks similar to the BeoVision 10 the technology has been completely transformed. BeoVision 11 delivers spectacular sound and best-in-class picture, and also convenient access to a complete range of online options.

CONNECTIVITY
When connecting to internet, wirelessly or wired, you can choose between apps such as YouTube, Facebook and Twitter, or surf wherever else you want to go. You can save bookmarks, enjoy simple page navigation with the remote, and use your iPad or Android tablet - and the BeoRemote app – to take advantage of QWERTY keyboards.

Made for today and ready for tomorrow, BeoVision 11 is one of the first televisions to support hybrid broadband TV (HbbTV). This new Pan-European standard will kick off a new era of interactivity, including catch up TV, voting, gaming, and all kinds of other personalised services.

BeoVision 11 is a DLNA TV, which makes it simple to stream music from a smart phone and to watch a film stored on a NAS drive. It provides connectivity to just about anything you want to throw at it through Wireless Network 2.4 or 5 GHz. Other connections include an Ethernet connection for software updates, two USB ports, three control outlets for control of up to six connected devices, and six HDMI sockets. And Apple aficionados will appreciate the dedicated space inside the cabinet for Apple TV.

PICTURE QUALITY
At the heart of BeoVision 11 is an all-new video engine that drives the 200Hz LED-based LCD screen, with glare polarizer, in either 2D or 3D. The two-sided LED backlight features 1.5 D local dimming to significantly improve contrast in 2D viewing. Digital noise and motion blur are radically reduced to reveal a stunningly natural picture, even in the most demanding of circumstances. Bang & Olufsen is also introducing a number of other exciting image improvement features with BeoVision 11:
360° Automatic Picture Control: Senses ambient light not only in front of the screen, but also behind it and to both sides, to continuously adjust brightness and contrast for optimal viewing comfort
Adaptive Contrast: Reveals unprecedented detail in very dark scenes even when bright sunlight floods the screen
Dedicated picture modes for film and gaming: In addition to the default adaptive picture mode, these new modes provide gamers with lightning-fast responsiveness and film lovers with white balance just like the director set it.

In this article: apple tv, AppleTv, Bang Olufsen, BangOlufsen, BeoVision, BeoVision 11, Beovision11, hdpostcross, smart tv, SmartTv, television, tv, tv set, TvSet
All products recommended by Engadget are selected by our editorial team, independent of our parent company. Some of our stories include affiliate links. If you buy something through one of these links, we may earn an affiliate commission.
Share
Tweet
Share