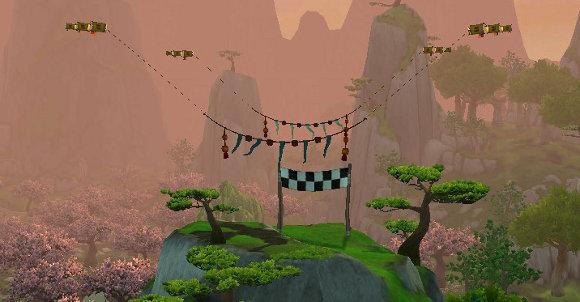 WoW Insider posted in early October, detailing Blizzard's announcement of the upcoming changes to reputation gain. Blizzard had recognized that the heavy demands placed on players to grind out seemingly endless daily quests to gain reputation with a faction were altogether too onerous, particularly for those with a substantial stable of alts.

Therefore, a system was announced whereby, once one character had attained revered reputation with a faction, every other character on that account would receive doubled reputation gains. Now, wowhead's dataminers have uncovered the method used by Blizzard to implement their new system: Grand Commendations.

These bind on pickup items, such as the Grand Commendation of the Golden Lotus "Unlock 100% bonus reputation gain with the Golden Lotus for all characters on this account". They are available for all the existing Pandaria factions, as well as the new factions appearing in 5.1: Operation: Shieldwall and the Dominance Offensive. There is no pricing data yet, but it seems likely that these will be purchaseable from the faction quartermasters. If you're struggling to locate the faction quartermasters, Matt Rossi wrote a guide detailing their locations.

It will be interesting to see if any such steps are taken retroactively, or whether it is considered unnecessary. Are there any pre-Mists factions for which such a system would be applicable, or even useful?

Mists of Pandaria is here! The level cap has been raised to 90, many players have returned to Azeroth, and pet battles are taking the world by storm. Keep an eye out for all of the latest news, and check out our comprehensive guide to Mists of Pandaria for everything you'll ever need to know.
In this article: alt-rep, alt-reputation, anglers, august-celestials, cloud-serpent, dailies, dominance-offensive, factions, golden-lotus, klaxxi, lorewalkers, mists, mists-of-pandaria, mists-reputation, operation-shieldwall, order-of-the-cloud-serpent, rep-grind, reputation, shado-pan, tillers
All products recommended by Engadget are selected by our editorial team, independent of our parent company. Some of our stories include affiliate links. If you buy something through one of these links, we may earn an affiliate commission.