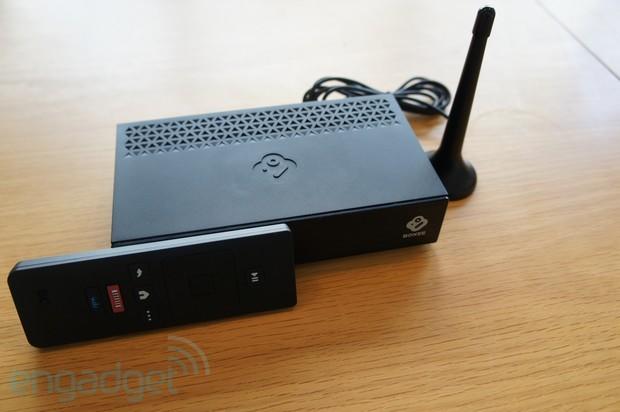 Launch day has finally arrived for Boxee's second hardware effort and now we're finding out even more about it. As we heard yesterday, the $99 Boxee TV will be a Walmart exclusive at retail (also available via Boxee's website), however early adopters in the holiday season can also expect a three month period to try out the "No Limits DVR" for free, plus a discounted service rate of $9.99 (normally $15) for life, three months of free Netflix access and a $5.99 Vudu credit. After the holidays, buyers can still expect free DVR trials, but there's no details on exactly what is in store. The list of supported apps has also grown, with Spotify, MLB, TED, Wall Street Journal, Accuweather and Boxee's own Cloudee joining the previously announced Netflix, Vudu, YouTube, Pandora and Vimeo on day one. Finally, we've got our first look at the HTML5 webapp that serves as a guide and second screen remote control.

For owners of the original Boxee Box, the company posted in a blog entry (the link appears to be down at the moment) that all back end support will remain running "for the foreseeable future" and an updated Flash Player is on the way. The bad news is that due to a lack of updates from Intel, it will not be able to upgrade the Netflix app for access outside the US and Canada, and agreements with premium content providers prevent opening it up for root access. The project has evolved a long way, from XBMC spinoff with a focus on support for locally stored and streaming video, then moving to a set-top box, offering OTA live TV viewing, and now its latest incarnation as a more conventionally shaped box built for OTA and ClearQAM channel viewing with the possibility of easier cable access in the future. We'll be reviewing the new hardware soon, potential buyers (especially in New York City, Los Angeles, Chicago, Dallas, Houston, Atlanta, Philadelphia and Washington DC where they can access the Cloud DVR) can check out the galleries for one last look or hit the link below to try out Boxee's take on the future of TV viewing. 17
In this article: apps, boxee, boxeebox, boxeetv, cloudee, dsm-382, guide, hdpostcross, launch, walmart
All products recommended by Engadget are selected by our editorial team, independent of our parent company. Some of our stories include affiliate links. If you buy something through one of these links, we may earn an affiliate commission.