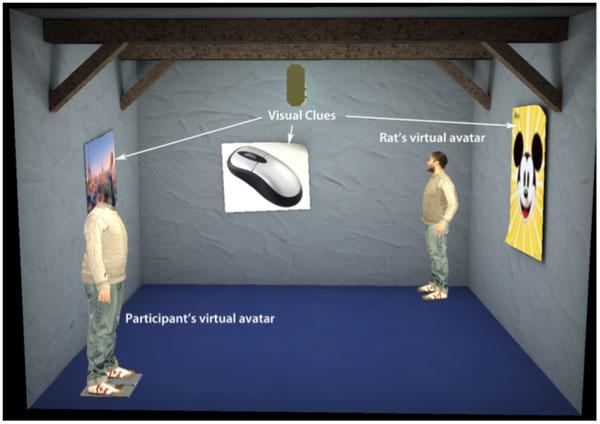 Sure, you can always play catch with the dog, but what kind of game can you play with a caged rodent? Well, "find the poster," apparently. A team of researchers from Universities in Spain, Germany, Austria, England and the US have put together a virtual reality system designed to let humans interact with rats at the rodent's scale, challenging human participants to find and lead the rodent to a unmarked goal. According to a paper published in PLoS One participants were "beamed" into the rat's environment by linking a head-mounted display and joystick to a rat-sized telepresence robot. Human players were then treated to a proportionally accurate representation of the game arena. The rat was there too, tracked with an overhead camera and represented by a human avatar.

Participants were tasked with coaxing their opponent in front one of three posters in attempt to sleuth out which one represents the "winning" position. When both players are in front of the correct mystery poster, a bell sounds and the game ends. The game was primarily created to test a scaled immersive virtual reality teleoperator system, but researchers are optimistic the technology could be used to observe animal behavior from a new perspective. Check out the setup in action after the break, or read on through to the source link below for a detailed description of how mankind and some of nature's smaller creatures can get along in a virtual space.

In this article: Austria, Barcolona, England, Germany, PLoS One, PlosOne, Spain, telepresence, University, Virtual Reality, VirtualReality
All products recommended by Engadget are selected by our editorial team, independent of our parent company. Some of our stories include affiliate links. If you buy something through one of these links, we may earn an affiliate commission.