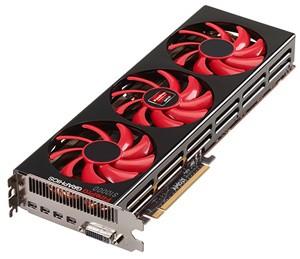 It can't be easy, running a modern IT department. Not only are people making ever more graphics-hungry demands on your servers, but NVIDIA and AMD are locked in an unending spec war that can make it hard to keep up with the market. The FirePro S10000 is merely the latest salvo: a dual-GPU, server-focused version of the W9000 that greatly increases overall compute power, delivering 5.91 TFLOPs of single precision calculations and 1.48 TFLOPS of dual precision performance in a single PCIe 3.0 card with 6GB of GDDR5 RAM. Even though the Graphics Core Next GPUs have been slightly underclocked to 825MHz, and even though they technically offer better performance per watt than a single-GPU configuration, their overall 375w power draw could still get you in trouble with your local power station. That level of consumption is around 50 percent higher than a regular server card like the S9000 or Tesla K10 and it may well require you to research new server cases and coolers in addition to weighing up the $3,600 cost for the component itself. See? This was never going to be straightforward.

In this article: amd, amd firepro s10000, AmdFireproS10000, dual-gpu, firepro, gpu, graphics, server, server graphics, ServerGraphics, virtualization
All products recommended by Engadget are selected by our editorial team, independent of our parent company. Some of our stories include affiliate links. If you buy something through one of these links, we may earn an affiliate commission.