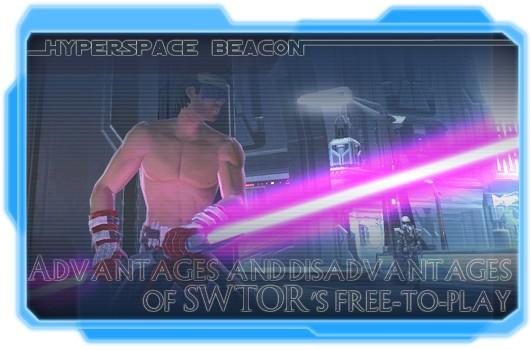 In a recent Gamasutra article, Funcom's Craig Morrison argued that most games that have moved from subscription to free-to-play are "using a hybrid model, where the free-to-play is a trial and then what they really want is the users to move on to whatever they've called what used to be a subscription." You don't have to look too deeply to realize that was BioWare's intention when it shifted Star Wars: The Old Republic to a free-to-play model. But is there still some advantage to just playing free-to-play?

Also, the Cartel Market, SWTOR's cash shop, both opened up a new real-money economic arena and transformed the in-game market. Most free-to-play cash shops offer cosmetic items or items that don't give players a clear advantage over other players. There are certainly no endgame items available on the market, but what about other buy-to-win items?

Let's get the negative stuff out of the way first. Despite what my guild says, I'm not negative. But I don't like to see blatant money-grubbing, and I feel that if you plan to play SWTOR without a full subscription, you're wasting your money by the time you hit endgame.

The benefit of SWTOR's free-to-play model is that you can play the leveling game without paying a dime. If you're starting fresh as a free player, I recommend that you spend a little bit of money in the Cartel Market so that you are bumped up to preferred status. This will grant you the regular items you would gain by playing the game, like sprint at level 15 and a cargo bay when you earn your ship.

I start to have issues when I consider that a good chunk of the preferred players are former subscribers that for whatever reason choose not to pay a monthly subscription. At this point, I believe the customer is being taken advantage of. Keep in mind that most of these players have paid at least $60 to buy the game in the first place. I would think that once that money is paid, those players deserve the core game. To me, that means items that were available to paying players at launch should be available to those players now, endgame repeatable content aside. However, preferred players (players returning to the game without a sub) are missing one crew skill, two quickbars, artifact equipment unlocks, title display, legacy name display, and the event equipment unlock. This adds up to at least $40.33, depending on how you buy Cartel Coins. This doesn't include items, like hiding the head slot ($5.29) and crew member appearance customization ($5.66), that should be a part of the core game. Heck, $40.33 is nearly two months of a full subscription!

That being said, if you plan to do only one thing, like operations, then it might be worth it to you in the long run since weekly passes cost only 240 Cartel Coins ($1.75). That's about half the cost of a standard subscription. Long term, it's cheaper to buy the the weekly passes, but if you are unsure whether you're going to stick to the game for more than six months, then you're better off just subscribing.

The Cartel Market itself is a lot of fun, especially for those who already have a subscription. And if I were to guess, based on how much I know people have spent, Electronic Arts made out like a bandit this weekend. I know for certain that one player on my server spent approximately $300 just on Cartel Coins. A close friend of mine spent $80 on coins. It'd be insane for me, but if they can afford it and are having fun, then more power to them.

As for me, I play the Galactic Trade Network. In-game credits are a lot easier for me to come by, and fortunately, all the items I wanted from the Cartel Market hit the GTN on Saturday. Is it wrong that I took advantage of people who placed items on the market for extremely cheap prices then flipped them for a higher price? Admittedly, I didn't do that with everything. I bought the Covert Torso Energy Armor for my male characters. (Side note: Male characters don't look as if they have nipples until you get really close to them; do you find that weird, too?) And since I got tired of my character having balls hit her face without retaliation, I had to buy the ball toss, too. [Editor's note: TWSS?] But strangely, the best item was one of the cheaper items: the elegant loungewear top. I know it's not new artwork; the designers just mashed together a couple of existing tops. But it is an extremely nice combination. More of these, please, BioWare.

In my opinion, there is only one item that is bad for the game. (Yes, I think the mediation throne and the axes are silly, but they aren't bad for the game.) The Advanced Pink-Purple War Hero's Crystal should not be in the game (or BioWare needs to remove expertise from pre-50 PvP). This crystal grants the player +41 expertise and can be used at level 10. That amount of expertise is not a lot in level 50 PvP, but when you consider that the vast majority of players pre-50 have zero expertise, then this item gives certain players an enormous advantage over others. It's an even bigger advantage when you remember that this crystal can be used in the offhand, too. That could grant a level 10 player 82 expertise.

I did so much this weekend with Update 1.5 that I cannot fit it all in one article. So next week, I'll talk to you about HK-51 and give you the breakdown of the new daily area Section X versus the existing daily areas. Which is the most advantageous for gaining credits?

Before I go, I would like to ask you a couple of questions. What is the most important thing for you in a free-to-play model? And at what point do you think that it is best to just subscribe instead of buying items a la carte?

In this article: a-la-carte, BioWare, cartel-coins, cartel-market, cash-shop, cash-shop-items, craig-morrison, ea, Electronic-Arts, expertise, f2p, featured, free-to-play, freemium, LucasArts, microtransaction, microtransactions, pay-to-win, preferred-access, premium, Star-Wars, star-wars-the-old-republic, SWTOR, the-old-republic, TOR, update-1.5
All products recommended by Engadget are selected by our editorial team, independent of our parent company. Some of our stories include affiliate links. If you buy something through one of these links, we may earn an affiliate commission.