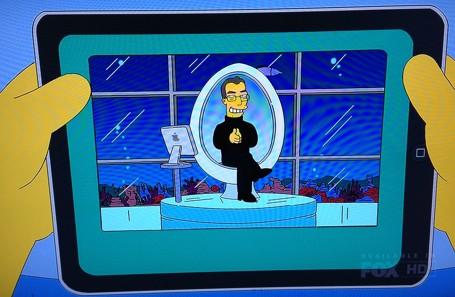 This past Sunday night The Simpsons ran an episode with what has now become a semi-regular guest star: Mapple Computer. This episode devoted a considerable chunk of the story to Homer's obsession with his newly won MyPad. I can't give away any more due to spoilers, but suffice it to say the man known for his gastric rapacity knowing no satiety meets his comeuppance in the materialistic trappings of tablet ownership. The ending of the main story, a nod to the late Steve Jobs, is not to be missed.

The episode on Hulu is blocked unless you're a Plus member and locked on Fox.com unless you are "connecting to a participating TV provider account." In accordance with all "we hate allowing people to watch free TV online even with advertising we can directly monetize" rules the networks have had in place since Jules Verne invented the television, the episode will be available for the unwashed masses to watch (in certain geo-restricted countries, naturally) December 3.

In this article: fox, homer, iPad, mypad, parody, simpsons, steve-jobs, tv
All products recommended by Engadget are selected by our editorial team, independent of our parent company. Some of our stories include affiliate links. If you buy something through one of these links, we may earn an affiliate commission.