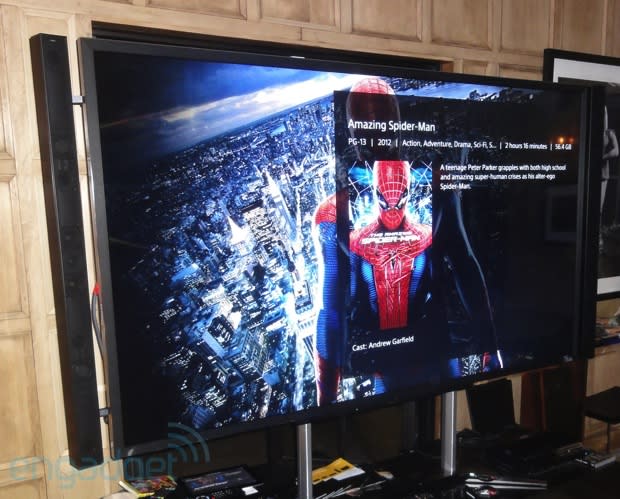 Recently Sony invited us to check out its forthcoming 84-inch XBR 4K LED TV and we couldn't resist an opportunity to get an idea of how well the company's $25,000 flagship stacked up against the competition. Perhaps trying to simulate an in-home viewing experience, Sony packed its gargantuan TV into a family room setting and allowed us to give it a spin. While we didn't get to channel surf freely, the provided stock media did a great job of highlighting the display's capabilities. Images were crisp but fluid, while colors remained strong and organic. One of our biggest concerns was that things would look too good and possibly appear unnatural.

But the XBR-84X900 managed to produce an excellent picture with stellar viewing angles. As for the content itself, we were treated to a collection of pre-loaded clips running off of Sony's recently announced 4K media server controlled by the system's included Xperia Tablet S. It should be noted that The Amazing Spider-Man was listed as a 56.4GB file -- compared to its Blu-ray counterpart, which comes in at an almost modest 36GB. Check after the break for more of our impressions, and a look at the tablet (loaded with a remote control app) that's included.

The tablet remote resembles most modern media centric apps, displaying large cover art icons, server memory options and guide-like content information with on-screen controls. For those of you hoping to use your smartphone or other tablet as a backup remote control, we were advised that this software is exclusive to the bundled device's hardware and that it will not work on other mobile devices. However, the app can be updated and reinstalled by visiting Google Play if accidentally deleted. On the brighter side of things, we were able to confirm that the rest of the tablet's features are completely intact, which gives access to Google Play's massive library of applications.

Getting back to the display itself, Sony claims that its new XCA8-4K chip gives the 84X900 the ability to upscale both HD and low-res content to a 4K 3,840 x 2,160 resolution. However, since we weren't in a free roam environment, we'll have to take the company's word for it, at least for now. Overall, we were impressed with Sony's titanic new TV, but we can't wait to see how well it performs in uncontrolled scenarios that haven't been fine tuned by a highly skilled team of engineers.

In this article: 4K, hdpostcross, LEDTV, sony, UltraHD, XBR-84X900
All products recommended by Engadget are selected by our editorial team, independent of our parent company. Some of our stories include affiliate links. If you buy something through one of these links, we may earn an affiliate commission.