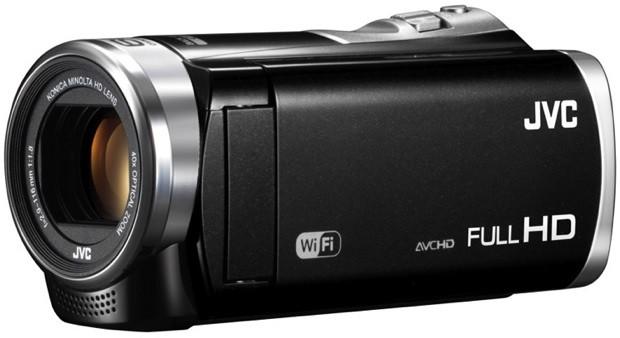 JVC occasionally drops hints as to what we'll see at CES through launches in Japan late in the year; if that's true with its new Everio camcorder launch, we'll face a small avalanche in Las Vegas. Five models are shipping in late December that include two with remote control: WiFi on the 16GB GZ-EX350 and 32GB GZ-EX370 lets a nearby Android phone or tablet steer the camera from a distance, and the camera itself can wirelessly back up its footage as well as share media through WiFi Direct. Springing for one of these or the strictly-offline GZ-E325 (8GB) and GZ-E345 (16GB) cameras will still net you a just-the-highlights playback mode that looks for smiles and tagged scenes. While the entry-level GZ-E320 misses out on the highlight mode, all five models share a 40X optical zoom, 1080p shooting from a BSI CMOS sensor, an SDXC card slot and a 3-inch touchscreen for previewing any would-be masterpieces. Although JVC hasn't mentioned any US plans, we wouldn't be surprised to see at least one or two of the new Everios cross the Pacific.

In this article: android, camcorder, cameras, everio, gz-e320, gz-e325, gz-e345, gz-ex350, gz-ex370, jvc, wifi
All products recommended by Engadget are selected by our editorial team, independent of our parent company. Some of our stories include affiliate links. If you buy something through one of these links, we may earn an affiliate commission.