Microsoft plans to be 'carbon negative' by 2030

2019 was Earth’s second-warmest year on record 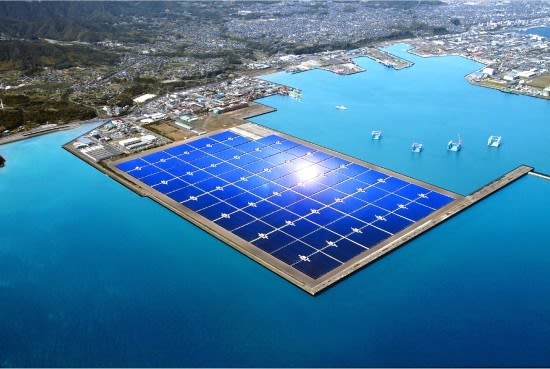 Japan is often on the cutting edge of technology, but one of the things it apparently does not have is a collection of large solar power plants. Kyocera, better known state side for its interesting cell phone designs, is looking to change that by teaming up with IHI and Mizuho Corporate Bank on a large facility in Kagoshima City. The 314 acre sun farm will collect solar rays on 290,000 Kyocera-built panels capable of generating 70 megawatts of electricity, increasing the country's sun-powered production by almost 40-percent and keeping roughly 22,000 homes thoroughly juiced. The project can't quite match some of the largest such plants here in the US, but it will go a long way towards getting the island nation back on track following the fallout of the tsunami. The ¥25 billion ($309 million) construction is expected to start in July. For more info check out the PR after the break.
Show full PR text
KYOCERA, IHI, MIZUHO Corporate Bank Reach Basic Agreement to Build & Operate 70MW Solar Power Plant in Japan
New business model to be established with 25 billion yen investment


(Left to right) Map of the southern island of Kyushu, Japan (site location indicated by red dot), and aerial image of site location


To be built in Kagoshima City (Kagoshima Prefecture), the solar power project is being undertaken by combining the strengths of the three companies: Kyocera utilizing its more than 35 years of experience in the solar business; IHI implementing its proactive stance on promoting the increased use of renewable energy; and Mizuho CB applying its wide-ranging finance knowledge.

Within the agreement, the Kyocera Group will be responsible for the supply of 100% of the solar modules and part of the construction & maintenance of the system; IHI will lease the land and actively participate in the operation of the project; and Mizuho CB will devise a financing plan for the project. Furthermore, a special-purpose company will be established to undertake the business operation of the mega-solar plant, with Kyocera planning to become the largest shareholder. In the process of exploring the feasibility of the new business, Kyocera and IHI have enlisted the support of and plan to get cooperation for investment in the special-purpose company from KDDI Corporation; Kyudenko Corporation; Kagoshima Bank, Ltd.; Takenaka Corporation and others.

With the cooperation of the Kagoshima prefectural and municipal governments and others in the local area, the companies seek to both revitalize the local area, and through the spread of renewable energy use, to contribute to the preservation of the environment and the advancement of society.

The planned site of the solar power plant is approximately 1,270,000m2 (approx. 314 acres) of land owned by IHI - roughly the same area as 27 baseball stadiums. The total project cost is estimated at approximately 25 billion yen (approx. 309 million US dollars*1), with construction to commence in July of this year.

Plans for the plant include exclusive use of approximately 290,000 Kyocera multicrystalline solar modules, with a total capacity of 70MW, becoming the largest officially announced solar power plant in Japan. The planned 70MW of solar power generation is equal to almost 40% of the total amount of public/industrial-use solar power equipment shipped domestically in CY2011*2. The approximately 79,000MWh of annual electricity generated will provide the equivalent power for roughly 22,000 average households*3, and will help to offset roughly 25,000 tons of CO2 per year*4.

Expectations and interest in solar energy have heightened to a new level in Japan with the planned July 1 start of a revamped feed-in tariff (FIT) program and the need to resolve power supply issues caused by the effects of the Great East Japan Earthquake. Under these circumstances the three companies have reached this basic agreement as they believe that it is their corporate responsibility to proactively tackle environmental problems.

70MW (largest in Japan, as of April 9, 2012; based on officially announced projects)
(The power generated is envisioned to be purchased by Kyushu Electric Power Co., Inc. in line with the Japanese Bill on Special Measures Concerning Procurement of Renewable Energy Sourced Electricity by Electric Utilities)

Note: Project details may change depending on the final purchasing price and conditions of the aforementioned Bill.

Kyocera
Based on the business rationale of "for the world, for the people," Kyocera began R&D of solar energy in 1975. Since then, the company has been continuously innovating upon its technology - contributing to both the development of the solar industry and protection of the environment. Kyocera holds the No.1 share of the domestic public/industrial-use solar market*5. In particular, where quality and reliability are of high importance, the company's modules have been selected for the highest number of "mega-solar" projects*6 and public school solar installations*7 in Japan, and its modules have also been used for a number of utility-scale solar projects around the world. Furthermore, Kyocera was the first manufacturer in the world to have its solar modules certified by the third party organization TUV Rheinland's Long-Term Sequential Test - earning the company an excellent reputation for its product quality and reliability.

By using the comprehensive strength of the Kyocera Group, and its many years of experience in construction and engineering of solar projects, the company plans to continue promoting solar power in Kagoshima Prefecture - where the company has three manufacturing plants employing roughly 6,000 people.

IHI
The IHI Group seeks to solve various environmental, industrial, social and energy related problems of the 21st century by using engineering expertise to focus on manufacturing technology - to improve the competitiveness of products and services offered by strengthening the capabilities required in development, design, supply, manufacturing and construction. In striving towards these goals, IHI is becoming a global enterprise offering safety and security for the benefit of both the environment and humanity. The company is participating in this mega-solar project to effectively utilize its property in Kagoshima City towards these goals. IHI also plans to use the area to experiment and verify other renewable energy applications in addition to the mega-solar plant.

Mizuho Corporate Bank
As a financial institution, Mizuho CB believes that it can make a large contribution to the field of environmental preservation, and thus strives to address challenges relating to climate change prevention and biodiversity conservation. On top of proactively financing renewable energy projects including solar thermal power, wind power and photovoltaic power generation, Mizuho CB also applies the Equator Principles - a credit risk management framework for determining, assessing and managing environmental and social risk in development project finance.
Via: Tech-On!
In this article: green, ihi, japan, kyocera, mizuho, Mizuho Corporate Bank, MizuhoCorporateBank, solar plant, solar power, SolarPlant, SolarPower
All products recommended by Engadget are selected by our editorial team, independent of our parent company. Some of our stories include affiliate links. If you buy something through one of these links, we may earn an affiliate commission.