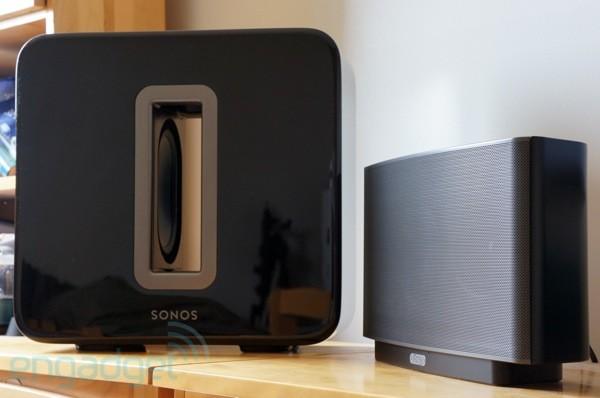 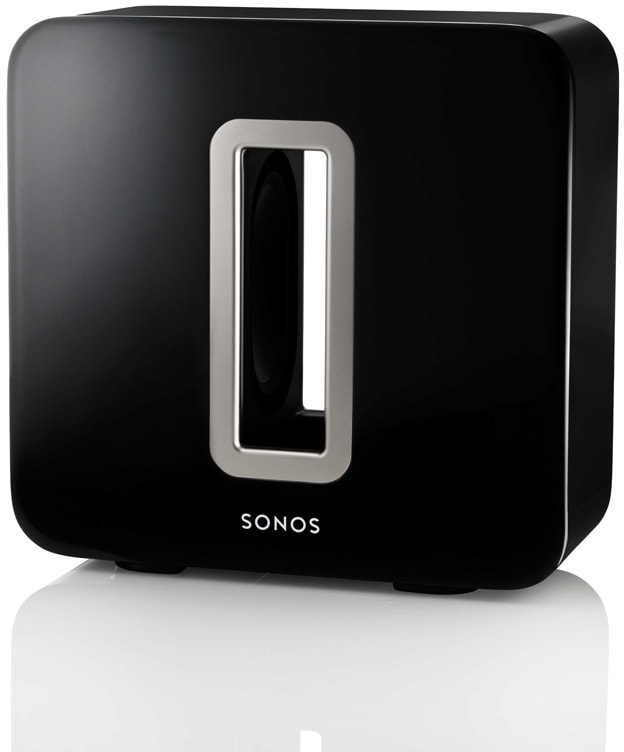 Every audio product Sonos has delivered so far has worked on the assumption that you would never need anything else after you bought it, whether it's linking to a sound system you already owned or an all-in-one system that Sonos built itself, like the Play:3 or Play:5 (born as the S5). The newly released Sub, by its nature, is entirely dependent on having one of the two Play speakers, and shows the company is becoming more of a traditional audio brand with a full ecosystem. A primary Sonos component can now be just the first step in a growing collection that improves as you expand it -- much as you'd buy a basic stereo, then better speakers, then more at a high-end audio shop. The Sub's $699 price certainly catapults any Sonos system into high-end territory, however, and sets some decidedly lofty expectations for how it will perform. We'll find out after the break if the sheer power and a few clever tricks are enough for the Sub to be an essential ingredient of a wireless home audio setup.

It's a lot to pay for a subwoofer that can't be used with non-Sonos hardware. If you can swing the cost, though, you'll get a tremendous boost to sound quality that integrates smoothly with a full Sonos network.

How would you rate the SUB?
We want to hear what you think. Post a quick review now to join the conversation!
Write a review

A first look at the Sub shows a much more ostentatious design than either the Play:3 or Play:5. Think of it as a donut monolith. As you quickly find out after hefting the subwoofer out of the box, though, that strange design serves a few very practical roles. Having a convenient handle to lug all 36 pounds is something of a lifesaver for setting up, but a closer inspection reveals that the hole is actually intrinsic to the Sub's acoustics: the ports are tucked inside that gap and deliberately interact with each other to cancel out any unwanted vibrations. Even with the volume cranked up high, we heard none of the rattles you'd hear from a subwoofer with anything less than a top-notch shell. The inward-facing profile also removes the dilemma of how you'll position the Sub. Since there's no worry about blocking a port, the Sub can rest either upright or flat on its back. As it's (relatively) slim, it can tuck under your couch if the seating is tall enough -- a location that will no doubt jolt a few guests the first time you play a party mix.

The software side of the setup equation is dead simple.

Having draped the Sub in compliments so far, we do have some gripes in reserve for the glossy black finish. Apart from not matching the matte black or white finishes of anything else in the current Sonos catalog, it's a magnet for just about every form of cosmetic blemish you can imagine. Dust, scratches and smudges are drawn to the body like moths to a flame. Hiding it will mostly take care of that issue, but who'd want to hide such an atypically pretty subwoofer? Sonos has already told us a matte version is coming that could cost $100 less; we'd spring for that in a heartbeat.

The process of getting the unit ready to go is a sharp break from the norm and, really, what makes this box stand out from the pack. The Sub isn't just a wireless subwoofer like we've seen so many times in home-theater-in-a-box setups. It's another part of the Sonos network, which means connecting it to the rest of your system either via a direct Ethernet link or hopping on wirelessly to one of the company's Bridge adapters. Choosing the latter route will incur another $49 hit to the wallet, but it offers the freedom of putting the Sub seemingly anywhere. We just wish Sonos had thrown in an old-fashioned connector or two; there's no way to reuse the Sub with a conventional audio system. That's a lot of money to throw at an add-on which loses all its effectiveness if you also give up its host speakers.

The software side of the setup equation is dead simple. Sonos can assume you already have one of its networks established. You only have to scan for a new device in the desktop or mobile Controller apps, press the lone button on the Sub's side and walk through a quick calibration linking it to the speakers you want to use. Tuning involves adjusting for distance and either exaggerating or scaling back the bass levels if nearby objects are creating problems. We had no trouble leaving the settings at their defaults in a mostly open setting with only one side facing a wall.

The party trick of the Sub is its relative liberty to glom on to any speakers in the network. Although switching between speakers requires a break in the pairing with its current parent and walking through the software once again -- and, usually, lugging the Sub across the home -- it's quick enough that there's rarely difficult. That's good if you decide later on that your bedside Play:3 doesn't need earth-shaking bass as much as the Play:5 in the living room. Controller apps will always identify which speaker set is attached to the Sub if there's ever any doubt as to which room is getting the most oomph.

We won't fully rehash the playback aspect of the Sonos Controller apps other than to point out a greatly improved desktop app that arrived between the Play:3 and Sub launch windows. Long-time listeners will continue to be annoyed at wading through the deep hierarchies for certain categories, like internet radio. However, there's now a unified search that will show all relevant results filtered by service, not to mention a party mode and an overall cleaner, easier-to-understand interface. The Android and iOS apps lack that improved search and are a bit clunkier due to limited screen area, but they can be used for every feature in a Sonos array short of sharing locally stored music. Our initial setup of the Sub took place solely within the Android app, for example. One warning: there's no changes to the subwoofer's output short of going back through the setup process once again, even if it's something you'll likely only ever do once or twice.

This is really what you're here for, isn't it? Thankfully, it's very difficult to fault the Sub's audio quality. We've tried it across a solo Play:3, as well as both single and dual Play:5 configurations, and there are consistent improvements in the sound no matter what Play speaker is running the show. Bass is tighter and much, much punchier -- so much so that we had to lower the volume substantially just to get back to normal levels and avoid drawing the wrath of fellow apartment dwellers. It's a nice problem to have, mind you, and that previously mentioned absence of buzz or rattle goes a long way when you do kick out the jams. As a matter of course, the subwoofer also slightly improves the overall performance by taking on the low-end frequencies that previously had to compete for attention with mids and highs in the Play's speaker drivers. Even classical music can sometimes sound better, let alone the deeper sounds of genres like drum-and-bass, dubstep or trance.

We appreciated one subtle, but important, distinction of the Sub's output: it's seemingly indistinguishable after you've set it up. The bass is always in sync with its host speaker, and it's virtually directionless. Unless you sit the subwoofer at the opposite end of the room, you'll never notice the separation; it's just your existing sound, magnified by a notch or 10. While other wireless subwoofers exhibit this kind of behavior, it's a strangely satisfying effect when the diminutive Play:3 appears to be punching well above its weight class through a subwoofer that you might not even see.

The impact of the Sub does correlate almost exactly to the speaker it's attached to, and that's where you'll have to be wary. Although the cleaner, stronger sound is very noticeable with a single Play:3, it nonetheless feels like a mismatch between a very powerful bass unit and a comparatively modest one-piece speaker. We'd honestly consider two Play:3 units, or one Play:5, as the minimum to rationally justify the Sub's presence. Should you swing the cash, though, even just the one Play:5 will produce a brighter and overall more balanced sound with the Sub in place than its smaller sibling. If you want a truly fearsome Sonos setup, try two Play:5 speakers mated to a Sub -- along with being clear even at high volumes, the three-piece setup is almost ridiculously powerful. Overkill, maybe, but it would be a definite crowd-pleaser if you have to fill a large room or the outdoors.

From our experience, the Sub is one of the better subwoofers in the field, wireless or otherwise. It adds forcefulness without turning the sound into mush. Making it worth the cash outlay is the challenge, even if it's much less of a problem than we first thought going in. It's not just the audio quality disparity that gives us pause; it's the idea of pairing the $299 Play:3 with a subwoofer that costs more than twice as much and won't necessarily sound proportionately better. Keeping that in mind, the Play:5 or two Play:3s result in a very effective combo when a Sub rides sidesaddle. Sonos, as always, is asking for a premium to get the full effect -- our ideal mix of a Play:5, a Bridge and the Sub costs an eye-watering $1,147. That being said, it very literally feels worthwhile if it's replacing a full, conventional home audio arrangement, not just a pair of bookshelf speakers. As long as you're genuinely committed to the idea of networked speakers rather than just dipping a toe in the pool, the Sub is transformative enough to validate the price.