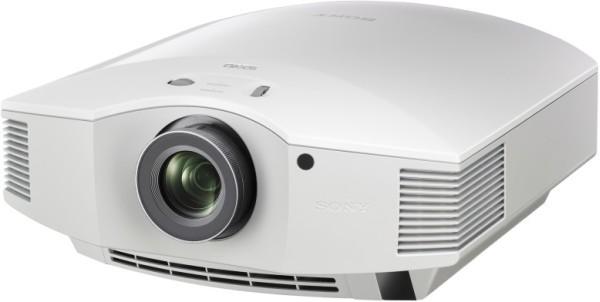 Slotting in above the VPL-HW30ES, this VPL-HW50ES uses a version of the same technology seen in the VW1000ES to process images for 4K does not do 4K at all and of course supports 3D. We're all very familiar with the company's SXRD projectors by now but if you need more information the press release is after the break. While we know these are due to ship across Europe in both black and white by the end of October, what you won't find, at least so far, is a price tag. We'll keep our eyes peeled at CEDIA next week for more information.

Update: Whoops, no, this is not a part of Sony's all-4K everything push, and brings merely 1080p resolution with some fancy image processing tech. We're now not quite as excited to see it, but 1,700 lumens of brightness, built-in 3D transmitter and wider lens shift range aren't too disappointing.

A 1,700lm brightness has been achieved by improving the light efficiency of the lamp and optimising the optical block. This combines with a new Bright Cinema and TV Mode to achieve 30 per cent more brightness than the previous model, without losing colour reproduction.

Sony's contrast enhancer technology and Optimised Advanced Iris 3 algorithm combine to give the projector a dynamic contrast ratio of more than 100,000:1. The contrast enhancer works by analysing each scene and then automatically optimising contrast in real-time by compensating for dark and bright parts of the image. Additional features such as high brightness and Sony's 3D Crosstalk reduction system, with SXRD panels, enhance the 3D image even further.

Commenting on the VPL-HW50ES, Tak Nakane, product manager, Sony Europe said: "When we launched the VPL-HW30ES we knew that we'd set a high standard. In announcing the VPL-HW50ES, Sony is confident that it's raised that bar again, setting the benchmark for home cinema projection. Home projection technology is advancing at a rapid pace, Sony is ensuring it's at the forefront of new developments, speaking with customers regularly to gain feedback and then channelling this knowledge into creating high-end, reliable products that are enjoyed by consumers worldwide."

As well as encompassing Sony's latest technology, the VPL-HW50ES also features a number of functionality upgrades that make it more user-friendly. These include a built-in 3D transmitter, a wider lens shift that makes its V shift range become +- 71 per cent and a whisper quiet 21db maximum noise output.

The VPL-HW50ES is available in black and white across Europe from the end of October 2012.

In this article: 3d, cedia, cedia 2012, Cedia2012, hdpostcross, ifa, ifa 2012, Ifa2012, pearl, projector, sony, sxrd, vpl-hw50es
All products recommended by Engadget are selected by our editorial team, independent of our parent company. Some of our stories include affiliate links. If you buy something through one of these links, we may earn an affiliate commission.
Share
Tweet
Share