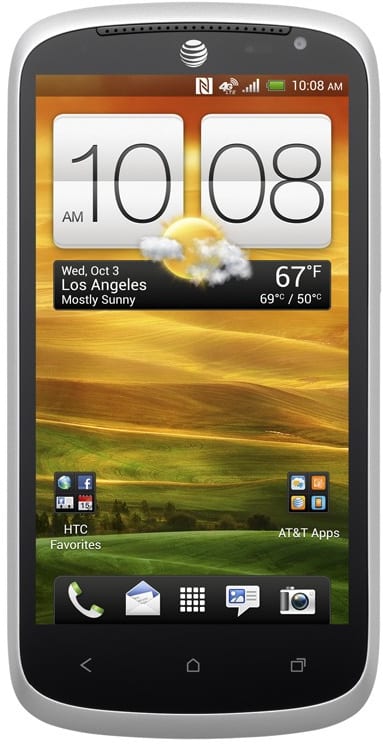 A basic grade school education teaches us that two is better than one, but it doesn't always work the same way when you add letters to phone names. In the case of HTC, the mid-range One VX is more of an average: it seems to take various aspects of the One X, One S and One V and jumbles them together into a $50 AT&T device (on contract). But does that mean this 4.5-inch qHD smartphone and its middle-of-the-road components offer an average experience? Not necessarily. Stay tuned below as we learn if the whole phone is greater than the sum of its parts.

The video performance isn't that much better, either. The motion was typically pretty smooth, but any clips we shot away from direct sunlight were filled with noise. Finally, the least enjoyable part of the experience was the audio. Sounds in the front delivered inconsistent results at best, ranging from muffled to overbearing and occasionally reaching our expectations; our voice behind the phone, however, was consistently muffled and never came through crystal clear.

The One VX has a 1.2GHz dual-core Snapdragon S4 Plus MSM8930 processor paired with an Adreno 305 GPU and 1GB RAM. This is the first time we've had the chance to review a device with this particular 28nm chipset, which was intended as a lower-cost option for LTE phones. Though it may be a brand-new wafer, its status as a dual-core S4 Plus gives us pretty high expectations and indeed, it didn't disappoint. For its intended price range, this thing is incredibly speedy. Let's first walk through the obligatory benchmarks:

As you can see, it's right in line with other inexpensive AT&T devices and pretty much what we'd expect from an S4 Plus. Granted, it'll get even better once it gets updated to Jelly Bean, but we were happy with our overall experience. Using the internet and playing games were more than satisfactory and the touchscreen was quite responsive. The only concern we had was in the occasional lag when navigating the home screen and app menu, but that primarily occurred when animations were turned on; flipping that switch off largely fixed the problem. Let's put it this way: for a smartphone in its respective pricing tier, the VX offers better-than-expected performance.

The 1,800mAh power cell yields above-average battery life. Our standard endurance test, which consists of playing a video on an endless loop at 50 percent brightness (in addition to a few other usual settings), resulted in a decent six hours and 20 minutes of life before shutting off. In real-world usage, however, we used the VX for a full week and a half and rarely needed a charge before bedtime. Moderate users can plan on getting through a full day without a problem, and those who use their phone nonstop should find their device hitting at least 10 hours. Again, this isn't amazing when compared to giants like the Galaxy Note II or RAZR Maxx HD, but it's not expected to be anywhere close in comparison, given the difference in size.

We didn't have any problems with connectivity. GPS locked our location in less than 10 seconds, LTE speeds hovered around 25 Mbps with occasional bursts up to 35 Mbps, Bluetooth and WiFi remained strong and we didn't experience any dropped calls or static. Unsurprisingly, the VX employs Beats Audio as its sound profile of choice, which means you'll get a heckuva lot of bass. Beats haters can still turn off the feature, but audio performance just isn't great without hunting around for a third-party EQ solution. We were blown away by the headset volume, which was so loud we rarely needed to bump the level up past 75 percent; the external speakers were average, though this is one area that suffers from the inclusion of Beats, as a ton of detail and clarity is left out of the music.

At $50 with a two-year commitment, the One VX is positioned as a mid-range smartphone but is priced low enough that folks on a budget can still afford it. The LG Escape also fits right in this territory and offers a lot of comparable specs, but you're getting a smaller screen (4.3 inches) and less internal storage (4GB). If you choose the VX, however, you're also sacrificing battery size (2,150mAh on the Escape) and a better front-facing camera (1.3MP). Both devices are solid choices and will fit you well, but we have a slight preference for the VX over the Escape.

With an seemingly endless stream of new phones ready to hit us in the face at CES next week and MWC next month, a mid-ranger like the One VX will probably fade from our memory pretty quickly. Aside from the attractive back and solid performance, it's a forgettable device. But for someone who's seeking a simple and reliable smartphone at a reasonable cost, HTC's latest offering is the best AT&T device in its price range.

The One VX may not be perfect, but it offers a sleek design and good performance. It's currently our favorite mid-range Android smartphone on AT&T.

How would you rate the One VX?
We want to hear what you think. Post a quick review now to join the conversation!
Write a review

8
In this article: Android4.0, att, htc, HtcOneVx, mobilepostcross, review, sense
All products recommended by Engadget are selected by our editorial team, independent of our parent company. Some of our stories include affiliate links. If you buy something through one of these links, we may earn an affiliate commission.