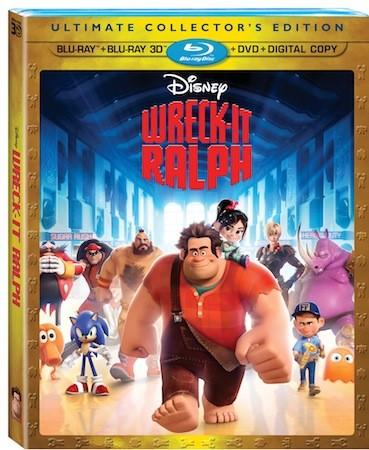 Following the lead of other studios like Fox with its Digital HD push, Disney has announced its first movie that customers will be able to buy on download and streaming services weeks before the disc is released. Wreck-It Ralph is a worldwide hit, bringing in $277 million and counting at the box office, but the first time you'll be able to snag it (legally) for home viewing in the US is February 12th in HD and 3D on supported services. The four disc Blu-ray 3D combo set is priced at $39.99 and will ship nearly a month later on March 5th, along with the 2-disc Blu-ray ($31.99), DVD and standard def video on-demand versions. Disney hasn't tipped its hat about any digital efforts itself to replace the Online streaming site it shut down in November, but clearly it's preparing for a multi-format future -- we'll see if we hear any more interesting details during CES in the coming week.

From Walt Disney Animation Studios, "Wreck-It Ralph" takes viewers on a hilarious journey. For decades, Ralph (voice of John C. Reilly) has played the bad guy in his popular video game. In a bold move, he embarks on an action-packed adventure and sets out to prove to everyone that he is a true hero with a big heart. As he explores exciting new worlds, he teams up with some unlikely new friends including feisty misfit Vanellope von Schweetz (voice of Sarah Silverman). The film is directed by Emmy®-winner Rich Moore.

Featuring an all-star voice cast including Jack McBrayer as the voice of Fix It Felix, Jr. and Jane Lynch as the voice of Sgt. Calhoun, plus breakthrough bonus features that take viewers even deeper into the world of video games, Disney's "Wreck-It Ralph" has something for every player. Over an hour of all-new bonus material is featured on the Digital and Blu-ray Combo Pack, including deleted and alternate scenes, the theatrical short "Paperman," plus much more.

Includes:
* Bit by Bit: Creating the Worlds of "Wreck-It Ralph" – Fans of the film will get a look at five new worlds created for "Wreck-It Ralph." The short takes viewers into Game Central Station with the artists who brought Sugar Rush, Hero's Duty and Fix It Felix Jr. to life.

* Video Game Commercials – Viewers can check out the commercials created for the video games featured in the film - Fix It Felix Jr., Sugar Rush, Hero's Duty and Fix It Felix Hammer.

* "Paperman" – This animated short film played in theaters before "Wreck It Ralph." It tells the story of a young man in an office who sees the girl of his dreams in a skyscraper window across the street. But how can he get her attention?

Includes:
* Disney Intermission: The Gamer's Guide to "Wreck-It-Ralph" – When the film is paused, host Chris Hardwick appears on screen to guide viewers through a series of 10 video segments offering an inside look at the many video game references, Disney references and other hidden surprises featured in the film.

In this article: 3d, blu-ray, digital, disney, hdpostcross, hdpostmini, minipost, streaming, video, window, wreck-it-ralph
All products recommended by Engadget are selected by our editorial team, independent of our parent company. Some of our stories include affiliate links. If you buy something through one of these links, we may earn an affiliate commission.