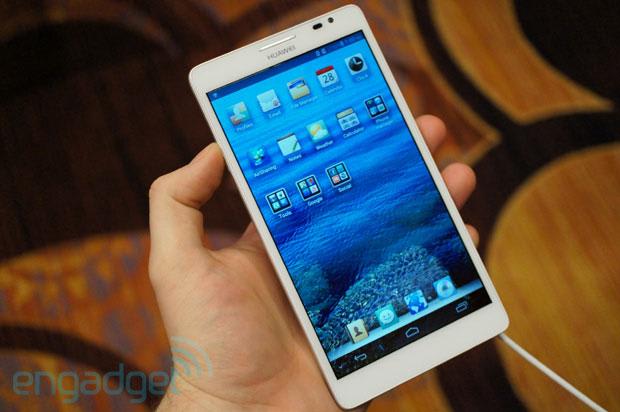 We've been handling Huawei's new 6.1-inch smartphone -- and there's a lot of screen there. The Ascend Mate feels good, it certainly doesn't feel as middling as other Huawei products we've seen in the past, with a slim profile that remains pretty solid as we browsed the new features. Fingers are crossed that its 4,050mAh battery will prove enough for that imposing 720p display, but at least there's a lot of oomph to start with. Visit our hands-on video and impressions right after the break.

It's a substantial slab you're playing with here, although the curves and the thin profile save it from being too huge for daily use. Those extra software inclusions (for one-handed use, including a dialer and keyboard) worked well enough and the screen really comes into its own when you're watching video or viewing photos -- to be expected when that display borders on tablet territory, moreso than even Samsung's Galaxy Note II.

The Ascend Mate's 6.1-inch display is attractive and claims 73 percent of that front surface -- something that Huawei was keen to point out. It's a whole lot of screen and due to the length of it, it didn't feel all that comfortable in our pocket, sticking out a little. The interface is lightly touched by Huawei's latest skin and its Hi-Silicon 1.5GHz quad-core processor was untroubled by the apps and web browsing we managed to fit in during play-time. Like smartphone giants like Samsung, it's adding it's own software spin to what Android already offers. These include a map and augmented reality combo called Guiding Wizard to get you places as well as high-speed look-up and word translation through smart reading although we only had a short amount of time to try these. We'll be expecting the Ascend Mate to land in China by the end of February 2013, while other countries (Huawei is apparently under discussions with US carriers) should see it appear in March.

In this article: 6.1Inch, android, ascendmate, ces2013, google, hands-on, huawei, mobilepostcross, video
All products recommended by Engadget are selected by our editorial team, independent of our parent company. Some of our stories include affiliate links. If you buy something through one of these links, we may earn an affiliate commission.