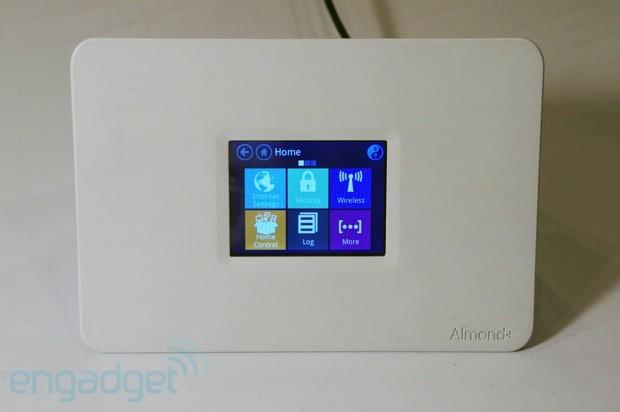 Wireless routers aren't the sexiest of gadgets to come across on the CES showfloor, but Securifi's doing its best with the Almond+. The all-white router, an update to last year's OG Almond, still features a 2.8-inch touchscreen, but now supports the 802.11ac standard for high speeds over 5GHz, in addition to Zigbee and Z-Wave for home automated control. That latter bit is a recent addition to the Almond+'s UI interface, allowing users with compatible Zigbee or Z-Wave products to control lights around the house or even monitor and receive notifications (cloud-synced via a free iOS or Android app) when their door is being opened or closed. Around back the innocuously designed device sports one USB 2.0 and five for gigabit ethernet. At present, Securifi intends to launch the Almond+ on Kickstarter for $99 sometime within the next week, so look for it to debut there soon. While you wait, take a look out our gallery below, as well as video demo just after the break. 21
In this article: 802.11ac, Almond+, ces2013, GigabitEthernet, hands-on, homecontrol, router, Securifi, touchscreen, video, zigbee, zwave
All products recommended by Engadget are selected by our editorial team, independent of our parent company. Some of our stories include affiliate links. If you buy something through one of these links, we may earn an affiliate commission.