Like every self-respecting company releasing new Windows 8 devices, HP has refreshed its existing laptops with touch-optimized features ready to handle the new OS' gestures. But also like any self-respecting PC maker, HP is outing a device with a more adventurous form factor. The Envy x2 stands out among other hybrids running the same 1.8GHz Atom processor for its more attractive design, IPS display and nice-to-have features like NFC and pen input. At $850 with the included keyboard dock, though, it's a hair more expensive than comparable products such as the Acer Iconia W510. So is the x2 a solid machine -- both as a laptop and as a standalone tablet? You know where to meet us if you want to find out. %Gallery-174792% 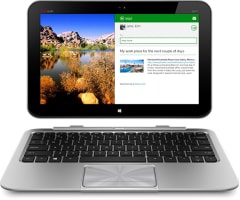 The x2 looks like a clamshell netbook -- and an attractive one, at that. The silver, brushed-aluminum chassis is sleek but not slippery to the touch, and the reflective HP logo on the back doesn't strike us as too obtrusive (you won't see it most of the time, anyway). Compared to other laptop / tablet hybrids like the plastic-clad Acer Iconia W510, this system feels elegant and well made. The x2's aluminum build is sturdy, but if you hold the device by the keyboard base, the screen wobbles a bit in its hinge. We don't think you'll be holding the device this way too often, though, so it shouldn't be a dealbreaker.

At 1.5 pounds and 0.3 inch thick as a standalone tablet, the Envy x2 feels very light; the LTE version of the Samsung ATIV Smart PC is a slightly bulkier 1.65 pounds and 0.39 inch thick in slate form, though the 10.1-inch Acer Iconia W510 is a bit more featherweight at 1.27 pounds. The x2's rounded edges and lightly textured backing make for a comfortable grip. With the keyboard dock attached, the machine weighs 3.1 pounds, and it's quite manageable, even for carrying one-handed.

We questioned our sanity for a moment when feeling around for this hybrid's power button. It's located on the back of the tablet -- along with the volume rocker -- which just doesn't feel intuitive. Most slates have these buttons on the sides, and we definitely prefer that setup. Once you get over the initial confusion, you'll still have to feel around a bit if you're viewing the screen from the front. Other ports are more conventionally located: along the left edge of the dock are HDMI and USB 2.0, while the right hosts the power connector, another USB 2.0 connection and an SD card slot. Detach the tablet from the dock, and you'll find the slate includes a microSD card slot, a 3.5mm headphone jack and a docking port that connects to the keyboard or the charging cable.

Connecting the tablet to the keyboard dock feels satisfying, but it can take a few moments to line up the connectors correctly. Once you've managed that, slide the release latch and the device snaps into place. When it's secured into laptop mode, the device feels very secure. It won't fall out of place until you pull the latch in the opposite direction to release the slate.

At first glance, the Envy x2's keyboard looks pretty nice. The black, island-style chiclets are well-spaced, and the layout doesn't feel cramped. (This is one advantage that laptop / tablet hybrids have over sliders; the slate doesn't infringe upon the keyboard deck.) There's ample space for your wrists, too. Get ready for the "but": the keys themselves feel mushy; they don't offer the springy, satisfying feedback we crave. On a typing test we notched a lower wpm score -- and a higher error rate -- than we typically muster. We wouldn't classify this keyboard as horrible, but it's less comfortable than its looks would suggest.

We would use stronger language to describe the Synaptics touchpad. On the plus side, it's very responsive; we had no issue executing Windows 8 gestures like swiping in from the right to reveal the Charms bar, for example. But the fact is this clicker is too sensitive. Almost every time we accidentally grazed the touchpad with our finger, it was interpreted as a click or swipe. You'll find this issue especially irksome when you're writing emails or working in a document, as the cursor often moves to an earlier point in the text.

Though the Envy x2's 11.6-inch display has a standard 1,366 x 768 resolution -- this pixel count is especially prevalent among hybrids running Atom processors -- IPS technology makes for better-than-average viewing angles. We were able to view content on-screen when we moved to the far right and left, but tipping the panel forward more than a bit causes images to wash out. This issue aside, though, colors look accurate, and text is crisp.

Evaluating the touch display as an input method, we don't have any complaints. Executing Win 8-specific gestures is seamless and easy. At the same time, the screen offers enough traction that you won't accidentally be clicking on items constantly. Incidentally, the Envy x2 also supports pen input, though we weren't able to test this functionality with our review unit.

HP includes Beats Audio on the x2, but it doesn't pack as much of a punch here as it does on full-fledged laptops. Sound is very muffled and tinny -- both for music and dialogue -- and even at max volume audio isn't very loud.

The x2's 8-megapixel rear-facing camera snaps decent shots with accurate colors. When we took it for a spin outside the Las Vegas Convention Center, images were bright and the shooter did an okay -- though not great -- job at focusing. Shooting indoors yields more blurry, out-of-focus images, especially if the atmosphere isn't well lit. The rear camera can also capture 1080p video. Our test footage didn't exhibit any jerkiness, but colors were quite muted. The x2's front-facing cam delivered very dark and pixelated self portraits; we'd recommend finding a brightly lit spot before you start video chatting.

Gallery: 2-in-1 smartpad prototype from Imerj and Frog Design | 31 Photos

The Envy x2 runs a 1.8GHz Intel Atom Z2760 processor, and that should be enough to tell you that Ultrabook-level performance is out of the question. On PCMark07, which measures overall performance, the x2 scored miles behind Ivy Bridge systems (read: 1,425 compared to ultraportable scores in the 3,000 to 5,000 range). Its I/O performance is similarly lackluster, with write speeds maxing out at 34 MB/s and reads hitting just 83 MB/s.

Cold-booting into the Windows 8 Start screen takes about 15 seconds, which doesn't feel particularly slow but definitely tails the 10-second boot time for most Win 8 Ultrabooks. As the x2's benchmark scores suggest, everyday performance is also less snappy. There's a slight lag when loading apps or launching several tabs in a browser. It's not more than three to five seconds, but you'll definitely notice the difference if your previous system ran a non-ULV chip.

Because the Envy x2 doesn't support DirectX 11, we weren't able to run our standard benchmarks, and we weren't able to load Steam games like Batman: Arkham City. We were able to play some casual online games (we're talking Tetris and the like) without issue.

The Envy x2 includes a battery in the keyboard dock in addition to one in the tablet, so we ran our battery test once with the keyboard attached and once without. (As you may know, this test entails playing a video on loop with WiFi on and brightness set to 65 percent.) In laptop mode, the machine lasted a very strong 12 hours and 30 minutes. When we ran the test on the tablet, it notched seven hours and 53 minutes.

HP pre-loads the Envy x2 with the standard set of Windows 8 apps, including Bing, Finance, SkyDrive, along with shortcuts to eBay, the Kindle store and Netflix. There's also the Fresh Paint drawing app and iHeartRadio. Proprietary programs include the Snapfish photo service, HP Page Lift, HP Printer Control and the HP+ hub. Finally, there's a Getting Started with Windows 8 utility, which could be helpful for those still learning the OS' many gestures. We'll also mention here that the machine includes NFC support for sharing by tapping two devices together.

The x2 we reviewed happens to be the only configuration available. For $850, you get an Intel Atom Z2760 processor with 2GB of RAM and a 64GB SSD. The only real customization option is your choice of warranty; you can supplement the included support with up to three years of accidental damage and theft protection for $230.

There are several other laptop / tablet hybrids in the playing field, so we'll compare apples to apples as much as we can here. There's the Acer Iconia W510, a 10.1-inch system that packs a 1,366 x 768 Gorilla Glass display with a 1.8GHz Intel Atom Z2760 processor and offers a 32GB SSD. We weren't completely satisfied with the W510's build quality when we gave it a go late last year, but we like how light it feels (it's just 2.63 pounds with the keyboard dock). The device starts at a lower $500, but that doesn't include the dock -- for that, you'll have to spring for the $750 model, which steps up to a 64GB SSD. As it happens, we previewed a non-benchmarkable version of the W510, though we expect to have a full review up soon.

You could also check out the 11.6-inch Samsung ATIV Smart PC, which runs the same Atom chip as the x2 and W510 and is available with or without AT&T LTE. It'll cost you $700 on contract without the dock, and the WiFi-only version goes from $500 without the keyboard. The WiFi version does, however, include an S Pen, a feature that may entice stylus-wielding types.

Finally, there's the Lenovo IdeaTab Lynx, which includes many of the same specs you've seen in the aforementioned products (read: 1.8GHz Atom processor, an 11.6-inch IPS display with a 1,366 x 768 resolution, up to a 64GB SSD) in a similarly lightweight package (three pounds with the keyboard). The Lynx isn't shipping yet, but Lenovo has priced it at $600 for the tablet and $750 for the slate and dock.

Laptop / tablet hybrids have their work cut out for them: providing a fluid experience as both a portable slate and a productivity-minded laptop -- let alone with an Atom processor doing the grunt work -- is a tall order. Making the design comfortable and easily convertible isn't exactly a simple task for PC makers, either.

HP did hit some high notes with the Envy x2, especially with the attractive and lightweight design. Battery life in laptop mode is also nothing to sniff at, but there are several things that hold the x2 back from being a truly comfortable device. The mushy keyboard is a huge downside, and the Atom chip's meager performance isn't encouraging for shoppers who want this to be their one and only computing device. We'd say your $850 is better spent elsewhere, but if you're dead-set on a device in this category, you could do a lot worse than HP's option.