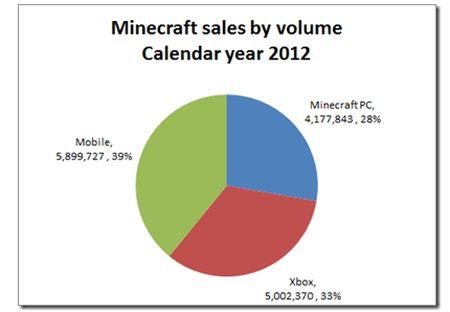 Minecraft creators Mojang have released stats on how the game's various platform clients (Windows/Mac, Xbox 360 and of course iOS and Android) have been selling, and the numbers have a surprise. The mobile version is outselling everything else by volume. As you can see above, Christmas sales boosted the mobile version, at least in terms of pure numbers, so that it's beating all other versions offered over the past year.

In terms of value, the mobile version didn't fare quite as well as the more expensive Windows and console versions, ending up with about 16 percent of sales as compared to the PC's 44 percent of incoming revenue.

Still, Christmas was a huge time for Minecraft: Pocket Edition apparently, with the company raking in money from almost 284,000 copies on that day alone. Minecraft is traditionally known as a PC title, as that's where the platform started, but the mobile version stepped up into its own during the last weeks of 2012.

In this article: console, ios, iPad, iPhone, minecraft, minecraft pocket edition, MinecraftPocketEdition, sales, value, version, volume, windows, xbox 360, Xbox360
All products recommended by Engadget are selected by our editorial team, independent of our parent company. Some of our stories include affiliate links. If you buy something through one of these links, we may earn an affiliate commission.