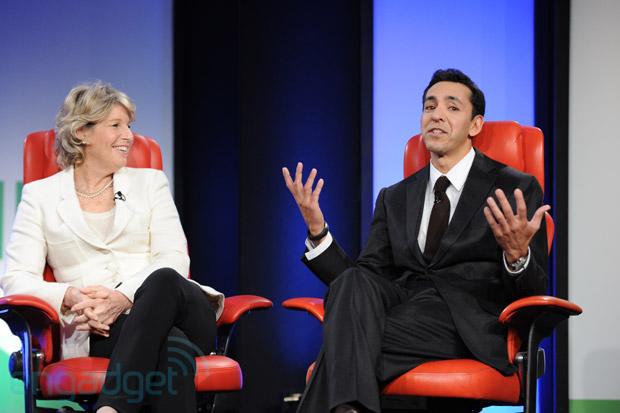 Yusuf Mehdi, senior vice president of Microsoft's Interactive Entertainment Business, just sat down alongside Nancy Tellem, Corporate Vice President at Microsoft LA Studios, to kick off this year's rendition of D:Dive Into Media here in Dana Point, Calif. The first session of the evening is being piloted by AllThingsD's Peter Kafka, and naturally, the topic of conversation is Xbox. For starters, Mehdi affirmed that Microsoft is witnessing an unmistakable transition of the Xbox 360 "from a gaming console to an entertainment console." At present, the install base is up to 76 million (up from around 70 million at the close of September 2012), with US-based users using the console for some 87 hours per month.

In fact, he stated that 18 billion (yeah, with a "B") hours of entertainment have been consumed on Xbox, and while Netflix is obviously the driving force, it might not be that way for much longer. He was quick to claim that Sony's PlayStation 3 "isn't as good of an entertainment console" -- something he feels that "everybody knows" -- and insinuated that the next-generation Xbox will stick to "big and premium." In other words, don't expect Microsoft to kick out a $50 Roku-style content box. Mehdi wants to ensure that the future of Xbox enables voice control, interactivity, and "other stuff that's big and beautiful."

Kicking the conversation over to Tellem, she affirmed that Microsoft is going to invest in premium content -- and in fact, said that she "hopes" for some of it to actually hit end users this year. Not surprisingly, folks are going to be asked to pay for it, but she wasn't willing to talk specifics. Of course, existing Xbox Live users are technically already paying, so it's possible that this new wave of content will be bundled into that monthly cost. When asked if Microsoft was planning to fund its own shows (much like Amazon and Netflix are doing), she seemed open to the idea, but also noted that Microsoft will absolutely partner with existing studios and content creators in order to give them yet another outlet (read: not pay-TV) to get people hooked.

Finally, she noted that there's "more latitude" in what kinds of material they can produce given that console distribution isn't as regulated as traditional broadcast. And, while a good deal of it will aim to satisfy the 18-24 male demographic, we're told that womenfolk and families will be looked after, too. Oh, and as for these Microsoft-funded shows hitting other distribution outlets? According to Tellem, that's unlikely -- at least at first -- but a sizable enough check from the likes of Hulu, Amazon, Sony, etc. could very well change that. In response to a question from TechCrunch's Ryan Lawler, Tellem noted that Microsoft's desire to churn out original, interactive entertainment is a way to both "move consoles, create new relationships with consumers and to expand [Microsoft's] audience," and from a higher level, to create the next generation of TV and "have it be a hit."

REDMOND, Wash. – Feb. 11, 2013 - Living room entertainment is in its largest evolutionary period since the transitions of black-and-white to color, and from standard definition to high definition. The Xbox 360, alongside Microsoft's entertainment industry partners, is at the forefront of that evolution as one of the only devices that brings all forms of entertainment together in one device, while making access to content easy and providing new ways to interact with existing programming. In 2012, the amount of TV and other entertainment offerings on Xbox almost tripled, now surpassing 100 custom, voice-controlled TV and entertainment apps on Xbox LIVE.

Snapshot of Xbox Momentum
February 11, 2013
New data illustrates how entertainment usage on the Xbox has exploded during its living room transformation.
Download: Web
"Yes, we started with video games, but we have been on a journey to make Xbox the center of every household's entertainment," says Yusuf Mehdi, corporate vice president of Microsoft's Interactive Entertainment Business.

Today Mehdi, along with Nancy Tellem, president of entertainment and digital media at Microsoft, participated in a D: Dive into Media session, facilitated by Peter Kafka, to discuss that journey and the opportunities that lie ahead. Mehdi revealed some new data that illustrates how entertainment usage on the Xbox has exploded during its living room transformation, and Tellem shared more about her newly created Los Angeles-based Xbox Entertainment Studios.

Social has been an important part of Xbox from the beginning, and that's true today more than ever. The Xbox LIVE community has grown to 46 million members, a 15 percent growth since last year.

"We believe that Xbox is being used by more people in the household, during more hours in the day and for more forms of entertainment," he says. "People are using Xbox in the morning to work out with the Kinect Nike+ Fitness program, kids are watching cartoons, families are enjoying movies, and of course people are playing blockbuster games like 'Halo 4.'"

The Future of TV Is Interactive and More Engaging

According to Mehdi, Xbox has something in the living room no one else has – a large installed base of devices already in the home, connected to TVs, and over half of those are already linked together, delivering amazing personalized and social entertainment experiences via the Xbox LIVE network.

Microsoft believes that the future of TV and entertainment is one where the TV becomes interactive and more engaging, Mehdi and Tellem explain. Microsoft sees that viewers want to do more with their TV shows, movies, sports and other forms of entertainment.

"We believe that we are at the start of the next wave of truly interactive entertainment," Tellem says.

Tellem is spearheading a new L.A.-based studio called Xbox Entertainment Studios, where the mission is to create true interactive content for Xbox and other devices that will change the way entertainment content is experienced and delivered. Tellem also now oversees live event programming for Xbox LIVE. Xbox has had success with live events such as the Elections 2012 Hub on Xbox LIVE, which aired the presidential debates with an added interactive polling capability. Viewers submitted 3 million answers to on-screen questions during the live telecast of one of the debates. More recently, Xbox aired an interactive red carpet experience for this year's Grammy Awards and will be doing the same for the 85th Academy Awards.

Nancy Tellem
February 11, 2013
Nancy Tellem, former president of CBS Network Television Entertainment Group, has joined Microsoft as Entertainment & Digital Media president.
"When I worked in traditional TV, we would find ourselves saying things like 'Wouldn't it be cool if we could add an interactive aspect directly into the show and engage directly with the viewers?'" says Tellem. "With Xbox, that is possible today."

Xbox already offers content such Kinect Sesame Street TV, which blurs the lines between traditional linear TV show and interactive experience, where a kid can jump into their beloved Sesame Street and throw coconuts at Grover.

But it's not just about new types of entertainment; it's also about new business models and new engagement opportunities for advertisers. Mehdi called the launch of NUads – a new ad format that harnesses Kinect and natural user interface – an important moment for TV advertising. NUads deliver what is most scarce to advertisers today: consumer engagement. NUads enable natural interactivity using the simplicity of a spoken word or the wave of a hand. The first wave of NUads, which launched last fall with interactive polling, saw a record level of consumer engagement with 37 percent of people responding. With this model, passive TV advertising is transformed into engaging and actionable experiences.

Pioneering the Future of TV

In addition to Xbox Entertainment Studios creating content that will highlight what's possible and demonstrate the capability of the Xbox platform, Microsoft will continue to partner with content creators, networks, aggregators and advertisers to "pioneer the future of TV," says Tellem.

During 2013, Microsoft is planning to launch more than 40 new voice-controlled, customized TV and entertainment apps on Xbox.

"We want to partner with the industry to bring entertainment into a new era," she says. "It's an era when interactive entertainment becomes the greatest form of all entertainment – and we couldn't be more excited to play a part in it."

In this article: console, dmedia, dmedia 2013, Dmedia2013, entertainment, hdpostcross, microsoft, streaming, xbox, xbox 360, Xbox360
All products recommended by Engadget are selected by our editorial team, independent of our parent company. Some of our stories include affiliate links. If you buy something through one of these links, we may earn an affiliate commission.