Samsung now has an 8TB SSD thanks to 3D memory tech

Switched On: Hinging on success

The brutal, exaggerated death of the form factor phone 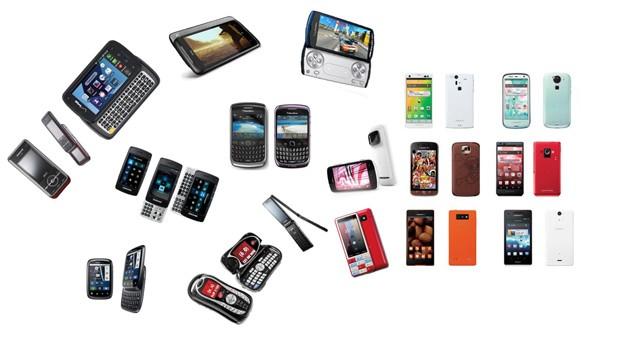 This year's Mobile World Congress is bound to be frenetic with phone news. That's why we're about to brave Barcelona's rain, airline strikes and pickpockets (no offense, dear BCN) in order to stay up to date. But if there's one aspect of mobile phones we're not counting on to provide much excitement, it's their fundamental physical design or form factor. We're in the grip of the monolith, the concrete slab, the plain rectangle, with its full touchscreen and a couple of buttons here and there, and that grip is so tight that even the pickpockets are slightly shocked when they haul in something with a physical QWERTY.

But the point of this piece isn't merely to plot the decline of form factor diversity. It's actually to argue that the current monotony is probably only temporary, and that signs of a revival are already in the air. Read on and we'll do our utmost to convince you.

A bit of MWC history

First, let's take a look at how we arrived at this status quo of slab domination. Scanning over past MWCs, you don't have to go back very far to a time when things were different:

Which brings us to back to the here and now, and to the realization that slab domination has become global. We have some choice over size (mostly "big" or "bigger"), but not much else.

Ask our man Ittousai from Engadget Japanese and he'll tell you that manufacturers in his nation refuse to experiment with exotic form factors for fear of losing sales overseas. Japan may have been a traditional reserve of 10-key candy bar phones like KDDI's Infobar C01 from last year, but NTT DoCoMo's headline launches have entirely been slabs since the (extremely weird) Fujitsu LOOX of 2011.

The Chinese smartphone market is dominated by the likes of Samsung, Lenovo and Coolpad, according to recent IDC figures, and those are all purveyors of the slab. The latest Nokia Asha phones targeting Asia and Africa are also mostly slabs -- with the portrait QWERTY Asha 205 being one nice exception. BlackBerry still carries the torch, but even the Torch is now a slab, while the Curve -- a staple in some emerging markets -- is just plain old.

So, we've established that virtually the entire world basks in the shadow of the monolith. But is that necessarily such a bad thing? And is it necessarily permanent?

You could actually argue -- and we're about to -- that slabification has been a huge force for progress in the mobile world. And that it has driven technology forward to the point where new form factors have become almost inevitable.

All the phones we've seen in the run-up to this year's MWC -- notably the Xperia Z and HTC One -- bear the scars of a very brutal process of natural selection. They're built for consumers who are no longer distracted by things like hinges or dual screens or "fret-style" keys, but who get straight to the raw credentials: UI, pixel density, battery life and performance. And when consumers are comparing products in such an organized manner, there are fewer gimmicks left for manufacturers to hide behind.

This harsh environment has forced the giants of this industry to spend billions of dollars on perfecting the fundamentals -- like Google with Android, or like Apple and Samsung with their bespoke displays and processors. This is all investment in the underlying science of how to build a mobile device. It's not just progress that applies to traditional slabs -- it can equally be deployed in totally new form factors like Google Glass.

"There are fewer gimmicks left for manufacturers to hide behind."

At the same time, smaller players have been forced to become more creative. They can pick up ready-made components from the big boys with minimal R&D, and spend their money on jumping to fill form factor niches. Easily one of the best examples of this we've seen recently has been the dual-screen YotaPhone from Russia.

The CEO of Yota Devices, Vlad Martynov, told us that he specifically wants to avoid competing with the giants "over specs and marginal improvements." The YotaPhone draws together components from suppliers like E Ink, Japan Display and Corning, who perfected their wares during the age of the slab but who can just as easily supply them to any new form factor that happens along.

Speaking of which, here are some more of our favorites:

We're at a crossroads. Either the slab will persist, like the technological equivalent of the crocodile, so perfectly adapted to its environment that it barely needs to change. Or things will go the opposite way: the technical expertise that has built up during the ultra-competitive era of the slab will lead to an explosion of new species. Not of clamshells or sliders, but of stuff that's totally new -- and only made possible thanks to the latest breakthroughs in processor, battery and display technology.

We're not going to try to predict how things will go in the short term, because frankly we're too chicken. But it's fair to say this: the science that is evident in the latest smartphones, both in the hardware components and in the software, has evolved to the point where it's too good to be confined to any traditional form factor.

In this article: form factor, FormFactor, mobilepostcross, mwc, mwc2013, qwerty, slab
All products recommended by Engadget are selected by our editorial team, independent of our parent company. Some of our stories include affiliate links. If you buy something through one of these links, we may earn an affiliate commission.