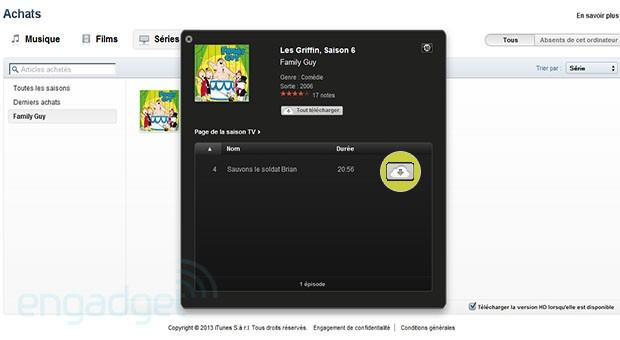 While stateside users might complain that we get all the good stuff in Europe first, Apple's iTunes in the Cloud for movies and TV shows has finally got around to rolling in to France and other parts of Europe, eons after it came out in the US. We confirmed that the new functionality works in France, which lets you buy films and TV shows from a computer, Apple TV or iOS device, then download it for free from the cloud on another. Others have reported by Twitter that it's working in Holland and Sweden as well, making it the first big move for the service since it rolled into the UK, Australia and Canada last summer. Until now, users in those nations were only able to download books, apps and music purchased in iTunes from the cloud. There's still no word from Apple about the move, however, and the list of supported countries hasn't been updated for those features -- so we'll enjoy it for now and hope Cupertino doesn't change its mind.

Update: We've confirmed with Apple that this rollout has indeed taken place. Belgium, Cyprus, Denmark, Finland, Greece, Luxembourg, Malta, the Netherlands, Norway and Sweden all get movies in the cloud, while France gets both movies and TV series in the cloud.

In this article: apple, Cloud, iTunes, iTunesInTheCloud, Movies, TVSeries
All products recommended by Engadget are selected by our editorial team, independent of our parent company. Some of our stories include affiliate links. If you buy something through one of these links, we may earn an affiliate commission.