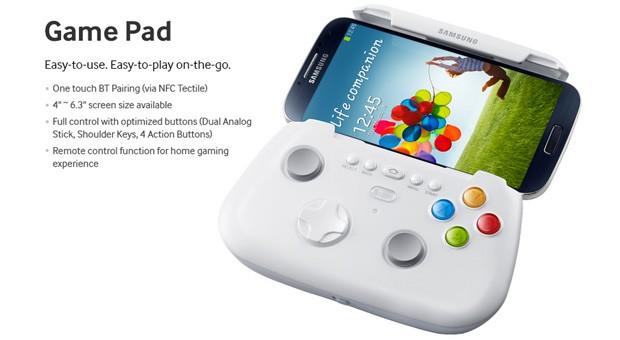 We noticed that Samsung's planned Game Pad accessory has an expanding clamp designed to accommodate screen sizes larger than the 5-inch Galaxy S 4 being used as its showcase, but it wasn't clear just how far it would go. Now that there's an official accessory page on the GS4's microsite, Samsung is unusually specific about the limit: 6.3 inches. That's an odd choice of display dimension, as it's bigger than the 5.5-inch Galaxy Note II and smaller than the 7-inch Galaxy Tab line. Samsung could just be hedging its bets, so we wouldn't make too many presumptions. It's often wise to give yourself a little headroom. However, a 6.3-inch screen would dovetail with unconfirmed Korea Times rumors that the next-generation Galaxy Note phone would use a similar size and give the 6.1-inch Ascend Mate a run for its money. We won't be convinced until we can see such a device for ourselves -- for all we know, it could be an extra-tiny version of a future Galaxy Tab.

In this article: accessories, android, controller, galaxynote, galaxynote3, galaxynoteiii, galaxytab, gamepad, mobilepostcross, peripherals, samsung
All products recommended by Engadget are selected by our editorial team, independent of our parent company. Some of our stories include affiliate links. If you buy something through one of these links, we may earn an affiliate commission.