If Windows 8 tablets with Intel's Clover Trail silicon under the hood were once a curiosity, well, they're certainly not novelties anymore. We've seen lower-powered hybrids from virtually every PC maker, providing a cheaper counterpoint to Core i5 and i7 systems, but still offering useful accessories like keyboard docks. In addition to one of our favorite Atom-powered slates, the ThinkPad Tablet 2, Lenovo is shilling the IdeaTab Lynx (also known as the IdeaTab K3011) for $549 and up. So how does this system stack up? Click through to find out. 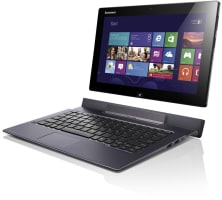 The IdeaTab Lynx is a straightforward slab of black tablet -- a thin and light one, at that. At 1.41 pounds and 0.37 inch thick, it won't weigh your hands down. It feels good in your palms, too, thanks to a pleasantly grippable textured backing. The Lynx may be comfortable in the hand, but the overall look is hardly high-end; the whole package feels plasticky and chintzy, and the backing seems like it could come off without too much effort (though, to be fair, it never did). The front of the device is completely bare save for Lenovo branding and a 2-megapixel front camera sitting above the 11.6-inch display. Of course, the front side is also home to the physical Windows 8 Start button, which sits in its typical spot below the screen and responds well to our presses.

Along the left edge of the device sit a button for toggling auto-rotate on and off, the volume rocker and a skinny speaker grille. The top of the device sports the power button and a microSD card slot, which is accessible by removing the plastic cover. On the right side, you'll find a headphone / mic jack, a micro-HDMI port and another small speaker, while the bottom edge has the micro-USB port along with slots for connecting the optional keyboard dock. On the back of the device, Lenovo's name is spelled out in silvery, reflective letters, and the diamond pattern invites your fingers to give it a scratch. One extra tidbit comes bundled: a micro-HDMI-to-VGA converter, which lets you connect the Lynx to compatible monitors and projectors.

The optional keyboard dock ($199) supplements the Lynx with two USB 2.0 ports, a built-in battery and a charging port in addition to a set of chiclets. The dock is made of plastic with a slate-grey finish, and the hinge with the docking connectors can fold down for more compact storage. It adds 1.45 pounds to the tablet, bringing the total weight to 2.86 pounds. The IdeaTab branding sits at the bottom-right corner of the keyboard deck, and a very petite touchpad is below the spacebar. Like several other dockable devices we've tested, the Lynx locks into place when you press the button at the top of the dock (this is also how you remove the tablet). This system works seamlessly -- no complaints there.

We do have some grumbling to do when it comes to the keys. These chiclets are the same U-shaped smile keys we've seen on the Yoga and other Lenovo devices, and while they're roomy and well-spaced, the deck itself exhibits a disturbing amount of flex. If you, like us, associate this brand with high-caliber keyboards, you're likely to feel a bit let down by this layout -- it's definitely not ThinkPad-level quality. On a typing test, we notched about 45 words per minute, which is significantly lower than our usual score, and our error rate was higher than usual. The dock also includes a small touchpad, which we found to be very finicky. It often had trouble distinguishing our left and right clicks, which meant clicking on an icon could take several more seconds than it should.

Like other Atom-based slates, the Lynx sports a standard resolution of 1,366 x 768 pixels. That doesn't mean image quality is run of the mill, though. Movies and YouTube clips streamed on the 11.6-inch panel look crisp, with accurate tones and good detail. Also like competing Clover Trail machines, the Lynx benefits from IPS technology, which allows for wide viewing angles. We had no trouble making out images and on-screen text even from the far right and left of center. As a touchscreen, the capacitive, five-touch panel works seamlessly, recognizing every swipe and tap we throw at it. Executing common Windows 8 gestures such as pulling in from the right to bring up the Charms bar register without a hitch. We'd even venture to say that this screen is more responsive than some others we've tested, as we don't recall a single instance of having to repeat a gesture on the Lynx.

We pumped the volume up to 100 percent and threw a few top-40 hits at the Lynx's tiny side-mounted speakers, and the results were as expected: audio is strong enough to fill a small room, and it sounds a bit canned, but not noticeably warped or overly tinny. We appreciate that the grilles aren't located on the rear side of the tablet, which leads to more muffled sound.


Benchmark scores never tell the whole story, and never is that more true than with Atom-powered Windows 8 tablets, which all run an 1.8GHz Intel Atom Z2760 processor with 2GB of RAM. Virtually every such device we've tested has scored within 50 points of the competition on PCMark 7 and 3DMark06. The Lynx turned in nearly the same numbers as the Dell Latitude 10. On the disk benchmark ATTO, the tablet notched max reads and writes of 81 MB/s and 35 MB/s, respectively. Graphics ability, like overall performance, is pretty much identical across all devices in this category, and you'll have no trouble playing very casual games. Cut the Rope and other titles downloaded from the Windows Store run smoothly, but don't even attempt World of Warcraft or anything that requires an extra-high frame rate.

The Lynx was rarely glitchy in our hands-on time, but it did have its off moments. When we were waking it from sleep once, for example, icons and text on the desktop were blurred and the screen remained frozen for several seconds. On another occasion, the playback options menu in the Windows 8 video app only showed up as a blank window, even after we restarted the app. For about 90 percent of our hands-on time, though, we had no issue switching between apps, browsing the web with multiple tabs open and watching movies on Netflix.

When we ran our battery test, which involves playing a locally stored video on loop with WiFi on and brightness set to 65 percent, the Lynx lasted six hours and 10 minutes. That's significantly shorter than Lenovo's rated time of eight hours, but our test is more taxing than most everyday use. With the slate attached to the dock, which includes a built-in battery, we saw nine hours and 24 minutes of runtime. In terms of longevity, the Lynx falls behind other Atom tablets we've tested; the Dell Latitude 10 held out an impressive 16 hours with its dock, for example.

Speaking of battery life, you'll need that bundled AC adapter to fuel up your Lynx; when we tried powering it up with just the included micro-USB cable, the tablet didn't maintain a charge. We've successfully charged other devices via micro-USB, though carrying the Lynx's small proprietary adapter shouldn't be a problem (just make sure you don't lose it).


The Lynx sports a 2-megapixel, front-facing camera capable of shooting video in 1080p. While you're set for conference calls, there's no rear shooter for capturing more conventional snapshots. We're not huge fans of tablet cameras to begin with, but it's an odd omission considering nearly all slates include one on the back and the front. As far as image quality on the 2MP cam goes, results are about on par with other tablets: colors look accurate, though not remarkably bright, and images don't display noticeable pixelation. Using video mode for anything other than video chats would be awkward, but if you want to capture some full HD footage and are dexterous enough to maneuver a camera without looking, you can expect smooth footage with accurate colors.


We have to hand it to Lenovo for showing some restraint in bundling software on the Lynx. The tablet comes pre-loaded with a handful of apps and utilities, none of which get in the way when you don't want to use them: Encyclopaedia Britannica, Evernote Touch, Fresh Paint, a trial of the Nitro Pro 7 PDF maker, the Merriam-Webster dictionary and the music service rara.com. There's also a shortcut to Lenovo Cloud Storage by SugarSync, which prompts you to sign up for either a free or paid account -- and that's it for proprietary software. Finally, you'll find a shortcut to Norton Studio, which also requires you to log in.

The Lynx isn't the best-designed, longest-lasting or most feature-rich low-powered hybrid. For that, you don't even have to look outside Lenovo's wheelhouse.

There's just one configuration of the Lynx: a $549 version with a 1.8GHz Atom processor, 2GB of RAM and 64GB of internal storage. The keyboard dock costs $199 extra, bringing the grand total to $748. In some ways, the Lynx is one of the most pared-down Windows 8 offerings we've seen, with just one model and one optional accessory, as opposed to productivity docks, keyboard cases and additional storage options. With that in mind, let's take a look at the playing field.

In terms of bang for your buck, the ASUS VivoTab Smart is tops among Atom-powered Windows 8 tablets. For $499, you get 64GB of storage and a well-made, lightweight (1.28-pound) design. The optional keyboard, sold bundled with a sleeve for an extra $130, is comfortable and portable as well. Battery life clocks in at about seven and a half hours, which isn't magnificent, but isn't downright abysmal, either. Also starting at $499, the Dell Latitude 10 offers long battery life and business features such as TPM. To really trick the Latitude 10 out as a productivity machine, though, you'll need to spend a few hundred more for the productivity dock and a keyboard. The Acer Iconia W510, for $550 and up, is not a bad deal, either. With the optional keyboard dock, you can expect more than 14 hours of untethered use, though the typing experience is cramped.

If you can spend a bit more, Lenovo's ThinkPad Tablet 2 is a more promising option than the Lynx -- and virtually all other Atom-based slates, for that matter. For $579 and up, you get a solid tablet with 10-plus hours of battery life, and options such as a keyboard and pen support sweeten the deal for business users. You'll have to settle for a slightly smaller, 10.1-inch screen, but we think it's well worth the sacrifice.

The moniker Lynx sounds a bit ferocious, but Lenovo's newest IdeaTab is hardly that. It's a reliable performer with a bright IPS display, and its price tag is reasonable, but the Lynx isn't the best-designed, longest-lasting or most feature-rich low-powered hybrid. For that, you don't even have to look outside Lenovo's wheelhouse: the ThinkPad Tablet 2's long battery life and comfortable keyboard make it our reigning favorite.