Daily iPhone App: Fish Out of Water! makes a gorgeous splash in a shallow pool 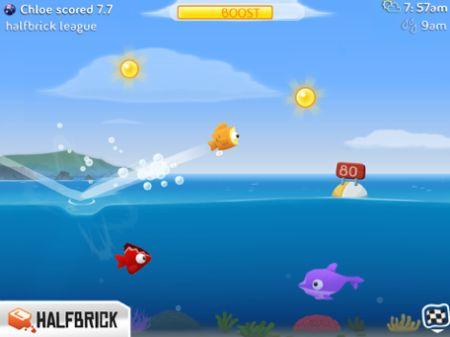 Halfbrick Studios is one of the most popular developers on the App Store, so much so that I can guarantee you've played their work before: Fruit Ninja and Jetpack Joyride are their two biggest titles. And now, the Australian developer has released a brand-new iOS game, called Fish Out of Water, available on the App Store now for US$0.99 cents.

Jetpack Joyride is one of my favorite iOS games of all time, and one of the main reasons for that is just how polished it is. It just oozes quality, and Fish Out of Water has that same feeling. The game runs perfectly, looks great and just bubbles over with well-crafted art and design work.

Unfortunately, Fish Out of Water's weakness is that it's simple, almost too simple to stay interesting for long. Here's the game's core: You throw fish. That's it, really -- the goal is to try and throw fish and earn both "skips" (where your fish tap across the water) and "distance", which you're then rated on by a panel of cartoony crabs. Your rating is placed up against a daily leaderboard for the world and your own league, and that's the game.

There are six fish to toss in total, and they each have their own strengths and weaknesses, and the game boasts an excellent weather system that's set to the clock every single day. But even with those complications, this game doesn't change all that much: You just toss fish, as hard as you can, at the right angle. Once you've tossed a fish, you can hit a boost button to try and speed it up at certain times, but in my experience, it doesn't matter much. Even when you rate high or low, the game doesn't do a great job of telling you what you did wrong or right, leaving the whole contest to what basically seems like chance.

The game's fun for a few throws, and it does do a solid job of keeping you interested -- you level up by performing various missions, and there are tons of social elements in there, so much so that you're notified as you play on how your friends are doing and whether you're beating them or vice versa. Halfbrick can't really make a bad game, as far as I'm concerned, and Fish Out of Water is good. It's just a little boring, is all -- the company opted for casual here, and they certainly hit that target. Hopefully we'll see something a little more involving, with the same amount of quality, from Halfbrick in the future.

In this article: boring, cartoon, crabs, daily app, daily iphone app, distance, distances, fish, fish out of water, FishOutOfWater, fun, halfbrick, iphone, jump, newsletter, pool, review, skips, splash, toss
All products recommended by Engadget are selected by our editorial team, independent of our parent company. Some of our stories include affiliate links. If you buy something through one of these links, we may earn an affiliate commission.
Share
Tweet
Share