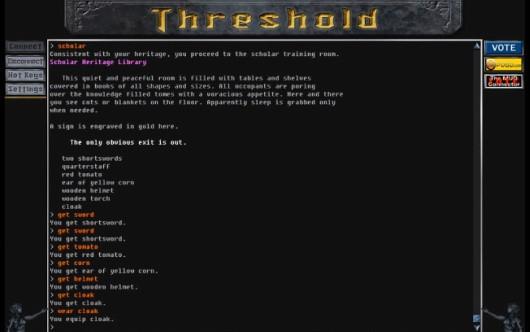 The last time I explored ThresholdRPG, I had a blast. It was one of a batch of MUDs that I used to re-introduce myself to the ancient gaming genre, and I enjoyed its simplicity and friendly community. MUDs can seem to be very similar to each other, so in order to enjoy them, you must be able to pick out the finer details that separate them. In ThresholdRPG, I particularly enjoyed fishing, roleplay, customization, and a free-to-play model that was years ahead of its time when first released 17 years ago.

The game can be a bit odd, like any MUD. During MUD May I've discovered just how confusing many of these titles can be, but I have also grown to enjoy solving the "mystery" of each game's particular set of code-words that unlock actions. ThresholdRPG is like other MUDs and introduces players to basic commands, but once out in the world a player is on her own. The good news is that an out-of-character help chat is always available and sits right on top of the standard roleplay-enforced chat. That juxtaposition of both channels actually helps immerse me in the game, allowing me to see literally where and when I can use out-of-character speech.

I asked Michael Hartman, president and CEO of Frogdice, to talk about MUD development and branching out into other styles of gaming.

Hartman has been creating games for 17 years, starting with ThresholdRPG in June of 1996. He started as student of law, moved on to something more creative, and hasn't looked back. ThresholdRPG has a lot of the same type of long-time players whom you can find in many other MUDs, players who have built characters up over many, many years of play. I'm so envious of people who have maintained a main title and have built up a true character, one that is almost a living extension of the human behind the keyboard. I pride myself on creating certain characters that I have carried throughout my life. A hero named Check has been a favorite of mine since I was literally eight or 10 years old, and I can only imagine if I had the ability to have played him in a virtual world for that time. Character is very important to me, and there is no better place to build a character than in a MUD.

I really enjoy using MUSHclient in order to play ThresholdRPG. It's a bit simpler to tweak than other clients like MUDlet (more on that later), and the way ThresholdRPG features a simple OOC help channel eases new players into the game. Most MUDs I have played offer a similar help channel, but it's particularly simple to use in ThresholdRPG.

I did give Hartman a hard time about the fact that it's called the "heritage" channel and changes its name after hitting a certain level, but a new player is welcomed by the heritage channel upon entering the game. Figuring out how to ask questions is as easy as watching a the chat because friendly players usually give instructions immediately. For the record, all channels can be turned off by those who do not want the extra text on the screen.

About 50% of ThresholdRPG players have played for more than 10 years. Again, this is not uncommon the world of MUDs, but it's always a welcome sign. If you are a new player, especially in a genre that you have never experienced before, the last thing you need are players who are simply upset by the thought of answering questions. The older crowds in most MUDs have gotten beyond caring about such things. These players have played out many of the typical MMO obsessions -- like levels or gear grinds -- and now enjoy helping new players, roleplaying, and existing in a virtual world. ThresholdRPG's crowd is not tiny, but it's not massive either, so the players have a helpful nature and names will quickly become familiar.


Watch live video from massivelytv on TwitchTV
But I had to ask Hartman about the other Frogdice projects. The company recently opened up a Kickstarter to raise funds for its latest title, Dungeon of Elements. It's sort of a cross between Tetris, a dungeon-crawler, and an RPG. All of the Frogdice games are connected in a single universe. For example, a gelatinous cube boss in Dungeon of Elements has inside it the body of a ThresholdRPG player who has made a career of dying by cube attack. Coin 'n Carry, a social game that puts players in the shoes of a merchant, connects to that same universe. It's sort of funny to see so many different styles of game -- from hardcore, old-school MUD to modern social games -- all under one roof, but Hartman knows that this familiarity can also breed player loyalty.

So how does Frogdice continue to grow? Monetization is often the hardest thing for independent developers to grasp. How does a new game-maker go from hobbyist to CEO? Hartman advises other indies to simply finish something, a good piece of advice when you consider that an incomplete project can hurt a new developer worse than a very simple completed one.

Frogdice monetizes ThresholdRPG by allowing players to donate any amount they choose. Depending on the amount, players can get a number of different goodies, from in-game experience and coin to special game areas that are much more than homes and more like instanced, custom areas of the game world. Players have always had the ability to play for free, but the current monetization rate for ThresholdRPG is about 95%!

One of the main issues that hindered many MUD developers from making money from their passion was the usage of certain systems. DIKU, for example, a popular system for creating MUDs, was created at a university in Denmark. The creators allow anyone to use it, but not for profit. So, many MUD developers had to stop developing in order to find jobs that actually paid the bills. Hartman points out that the MUD movement came to its own before the open-source movement, something that has "really strangled the ability of MUDs to evolve."

So while I thank Michael for his open communication and his willingness to give me a peek into the world of MUD creation, I'm still stuck wondering why MUD developers aren't creating systems completely from scratch and throwing away the old conventions of MUDdom. This MUD May has taught me one thing: The old systems of combat and interaction are grand, but like Twine games or newer developers like Failbetter Games, new players will be attracted by newer systems that are built with today's gamers in mind. No, I'm not asking for simpler gameplay that holds the hand of every player, but I wish MUD developers and many community members would re-think some of the old systems. I want to see commands that make more sense. Instead of "score" to look at a player's profile, how about "profile"? Or, better yet, why don't we see more video tutorials from MUD developers? A simple video can do so, so much more than even hours within a game.

We'll see how the future goes. For now, continue to enjoy MUD May. Next week I will be featuring a video interview with the developers of Achaea! See you then!

Each week, Free for All brings you ideas, news, and reviews from the world of free-to-play, indie, and import games -- a world that is often overlooked by gamers. Leave it to Beau Hindman to talk about the games you didn't know you wanted! Have an idea for a subject or a killer new game that no one has heard of? Send it to beau@massively.com!
In this article: achaea, beau-hindman, f2p, featured, ffa, free-for-all, free-to-play, freemium, interview, michael-hartman, mud, MUD-May, MUDs, opinion, threshold, threshold-rpg, thresholdrpg, velvet-rope
All products recommended by Engadget are selected by our editorial team, independent of our parent company. Some of our stories include affiliate links. If you buy something through one of these links, we may earn an affiliate commission.