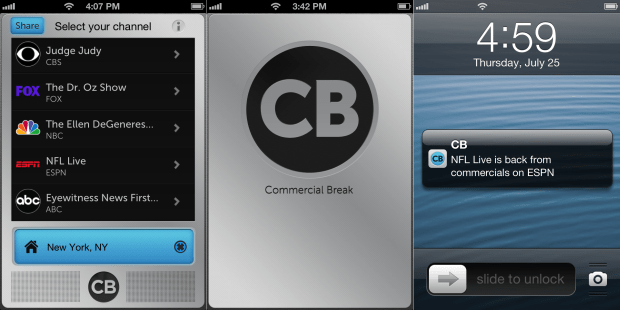 When we're raiding the fridge during a Vikings game, what'd be nice is a push notification just before Adrian Peterson runs into the end zone. Seeing as that's probably not feasible given current tech, we'll settle for an iOS app that alerts us when a timeout or commercial is over. Commercial Break was designed to do just that: you tell it what channel you're watching and it uses DSP and some algorithms to analyze audio and video cues, delivering a push notification to your mobile device once what you were watching comes back.

As of right now, it's in public beta with 10 compatible channels in New York City: ABC, CBS, CNN, ESPN, ESPN2, FOX, NBC, TNT, TBS and USA. Outside of the Big Apple, CNN, ESPN and ESPN2 are compatible nationwide, with a few of these channels also available to others along the East Coast. The developers said that once the test run is over, they plan to expand to other markets and port the app to Android. We just wish it worked with AMC too -- missing any of Heisenberg's return because of a fried chicken craving would be tragic.

(Note: While all 10 channels are available for use in NYC, national cable channels such as CNN, ESPN and ESPN2 are also accessible nationwide, and TNT, TBS and USA are accessible throughout the East Coast.)

Commercial Break is available on Apple's App Store free of charge during its public beta. "The average American sees more than ten hours of commercials every week. Commercial Break is two Israelis' attempt to help them take back that time," said Commercial Break cofounder and CEO Haim Kairy. "The idea came to me after channel-surfing one day: I realized that my cofounder, Eli Ben David, and I could apply our backgrounds in engineering and sound production to automate the tedious channel-flipping that we all do while waiting for our program to come back from commercials."

Commercial Break's unique algorithms identify the end of commercial breaks by analyzing dozens of cues from audio and video signals, 40 times per second. To use the app, viewers simply select the channel they're watching to start getting instant alerts when commercials end.

After its public beta, the company plans to expand to additional US cities and make the app available for Android.

In this article: beta, commercial, commercialbreak, hd, hdpostcross, IOS, mobilepostcross, NewYorkCity, tv
All products recommended by Engadget are selected by our editorial team, independent of our parent company. Some of our stories include affiliate links. If you buy something through one of these links, we may earn an affiliate commission.