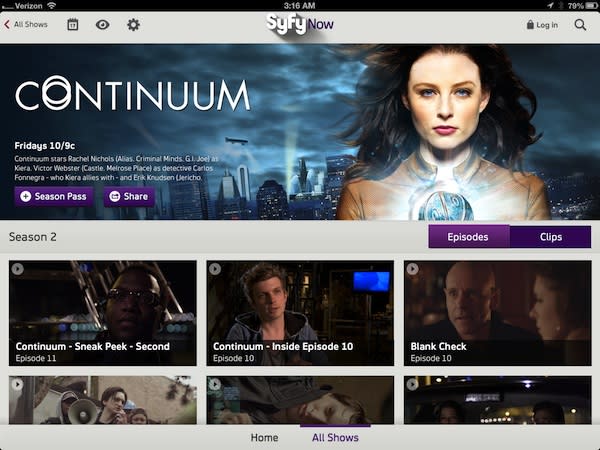 The Syfy for iPhone app is relaunching as SyFy Now, while the old Syfy app for iPad is reborn as Syfy Sync, dedicated solely to the network's second screen ambitions. Why the changes? Now is all about TV Everywhere with streaming of full episodes of Syfy's original series the day after they air and bookmarks that sync across devices with iCloud. This app can't put Alphas back on the air, but it can bring Defiance, Robot Combat League and Being Human to wherever you are, assuming you have a compatible TV provider. At launch, customers with Armstrong, AT&T U-Verse, Cablevision's Optimum TV service, Charter, Comcast's Xfinity TV, DISH, Mediacom, Suddenlink, Verizon FiOS, and Wide Open West (WOW) are ready to go, and others are coming soon.

Don't have authentication? The show clips and behind the scenes video previously featured in the app are still available. Syfy's app for Android isn't updated yet (and still isn't ready for the new Nexus 7) but the press release promises Now will launch there in September -- hopefully the network can figure out how to include TV movies like Sharknado 2 in the package by then.

NEW YORK – August 15, 2013 – Today, Syfy reveals the launch of the new Syfy Now App for iPhone, iPad and iTouch as part of NBCUniversal's TV Everywhere cross-portfolio rollout. The app, available for download through Apple's App Store, gives authenticated TV viewers on-the-go access to original Syfy series content the day after air. Syfy is the second cable entertainment network within NBCUniversal to provide this offering – with all cable networks soon to follow – which marks an important step in the company's long-term strategy to provide both viewers and marketers a user friendly way to engage with its content on multiple platforms.

"Syfy's audience of tech-savvy 'Igniters' are among the very first to find new and more immersive ways to access and consume their favorite Syfy programs," said Dave Howe, President, Syfy and Chiller. "Syfy Now will deliver the kind of experience our smart and trend-setting viewers are looking for from us."

Through Syfy Now, which derives its name from the "Bravo Now" app, viewers have access to full, streaming episodes of Syfy original series, including hit scripted shows Defiance, Haven and Being Human, as well as popular unscripted series like Face Off, Paranormal Witness and Haunted Highway.

Users can create individual season passes and "watchlists" for later viewing with Syfy Now, all of which can be synced via Apple's iCloud, allowing for seamless viewing across any iOS device. Facebook and Twitter update functions are integrated into the app for enhanced social media engagement ability.

"The launch of Syfy Now underscores our commitment to bring viewers TV Everywhere from across our portfolio of networks," said Matt Bond, Executive Vice President, NBCUniversal Content Distribution. "Syfy Now means more access for Syfy's passionate fans who are taking every advantage of multiple screen viewing, so they can watch anywhere, anytime."

Syfy is a media destination for imagination-based entertainment. With year round acclaimed original series, events, blockbuster movies, classic science fiction and fantasy programming, a dynamic Web site (www.Syfy.com), and a portfolio of adjacent business (Syfy Ventures), Syfy is a passport to limitless possibilities. Originally launched in 1992 as SCI FI Channel, and currently in more than 98 million homes, Syfy is a network of NBCUniversal, one of the world's leading media and entertainment companies. (Syfy. Imagine greater.)

In this article: android, apple, cable, hdpostcross, ios, mobilepostcross, NbcUniversal, pay-tv, satellite, streaming, syfy, tveverywhere
All products recommended by Engadget are selected by our editorial team, independent of our parent company. Some of our stories include affiliate links. If you buy something through one of these links, we may earn an affiliate commission.