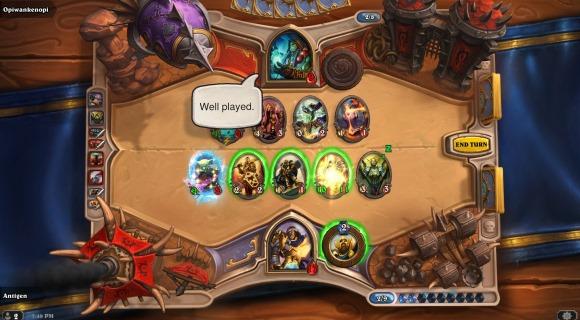 The Hearthstone beta has started, and most of us here at WoW Insider have been captivated by the free-to-play card game like a cat to a laser pointer. I know that I have sacrificed what would have been a very productive weekend for the greater good of gaming. Okay, so I probably wouldn't have cured cancer or solved world hunger, but still the game is very addictive despite being quite simple on its surface.

As I'm exploring everything Hearthstone has to offer, I have to say that one of the most enjoyable aspects of the game is the Arena. Essentially, the Arena is a game mode where you assemble a deck using one of three randomized heroes and a selection of semi-randomized cards and square off against other players. The more you win, the larger your heap of treasure will be. Lose three times and you're out, though you'll still receive some rewards for the highest level you were able to obtain.

After scrounging up enough gold through wins, daily quests, and the one time achievement to defeat all of the expert AI in Practice mode, I entered the Arena and was lucky enough to see my go-to hero among the three random choices: Uther. From there I built my deck by picking one card from three choices and repeating that thirty times. Something interesting to note is that while normal play prohibits you from putting more than two of any one card in your deck, there are no such restrictions in the Arena. I was fortunate to grab three copies of Consecration, a personal favorite of mine for wiping out any opposition.

From there I entered my first match. I was matched against a rogue deck, a hero that can be very aggressive given the right player behind the cards. Unfortunately, the right player was indeed behind those cards and I lost.

Shaking myself off I entered my second match, this time against a shaman deck. Usually, shaman decks are ripe targets for Consecration as the player spends a good deal of mana swarming the field with totems and minions. At worst I figured I could burn Equality, bringing all minions to one health, then swoop in with a Consecration to wipe out the opposing side of the board, leaving the enemy hero open to attack.

Well, things didn't quite work out that way. Before I could mount a proper defense, I found myself on the business end of a couple nasty Windfury-buffed attacks, and before I knew it I had lost a second time.

I held on by the seat of my pants, each win upgrading my key to something bigger and better. Even though I knew that I wasn't going to lose the loot if I had lost, I was growing increasingly nervous that my win streak would be ended unceremoniously.

Despite my reservations, however, I managed to get up to seven wins before I faced another shaman that would prove to be more than a match for me. He had me on the ropes, I had precious little health remaining and only a Consecration in my hand. Seeing my eventual demise, I conceded and tossed out a very well-earned "Well played" emote before watching my hero explode into dust.

My rewards for a series of battles hard fought were very nice -- a pack of cards, a healthy handful of dust, and enough gold to try again, should I so desire. Although the hour was getting far too late to begin the process anew, I will definitely be reentering the Arena soon to try to beat my streak and claim even grander prizes.