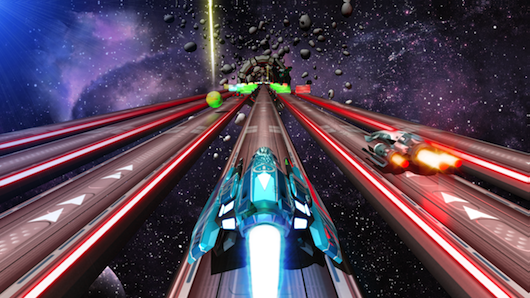 Unlike its visually-comparable, fallen racing counterpart, Wipeout, Switch Galaxy Ultra will task players with gathering as many points in as few seconds as possible by switching between fixed lanes. Gates, other drivers and occasional lasers of death fired from overhead aircrafts will stand between players and indisputable glory atop the leaderboards.

Switch Galaxy Ultra will have pre-defined tracks in a story mode, but players can also try to persevere on the Survival Mode's infinite track and shove their success in their friends' faces.
In this article: atomicom, gamesCOM, Gamescom-2013, PlayStation, ps4, switch-galaxy-ultra, vita
All products recommended by Engadget are selected by our editorial team, independent of our parent company. Some of our stories include affiliate links. If you buy something through one of these links, we may earn an affiliate commission.