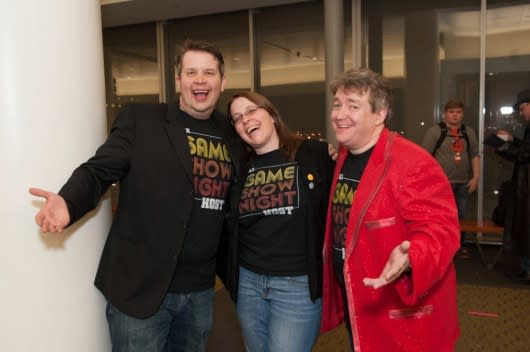 If you ever see Joystiq's own Managing Editor Susan Arendt at PAX, you can count on two things: There's a 50 percent chance that "Hey, Ladies" by The Beastie Boys is going through her head, and there's going to be a Game Show Night.

Game Show Night is three back-to-back (to back) hours of live game show action, and this year, it even has prizes, courtesy of our friends at 80stees.com. Hour one, hosted by Susan, is Blankety Blank, which is based on the classic Match Game. The second hour, hosted by Activision's Dan Amrich, is Jeopardy and has real lock-out buzzers and everything. Game|Life's Chris Kohler has hosting duty for the super-crowd pleasing Family Feud in hour three, and in between games, Ars Technica's Kyle Orland will be running some Let's Make a Deal-style giveaways. Prizes, people. Stuff! Neat stuff!

It's raucous, it's got its mind firmly in the gutter, and it is amazing to experience in person. Want an idea of how it goes? Check out Game Show Night from earlier this year at PAX East. (Blankety Blank is very not safe for work. Or children. Or anyone with good taste, really.)

Game Show Night starts Friday night at 7pm, in the Kraken theater, but get there early if you want to increase your chances of being picked as a contestant. The entire shindig is also being streamed on Twitch in case the fates conspired to prevent you from attending PAX Prime this year.
In this article: game-show-night, pax-prime-2013
All products recommended by Engadget are selected by our editorial team, independent of our parent company. Some of our stories include affiliate links. If you buy something through one of these links, we may earn an affiliate commission.