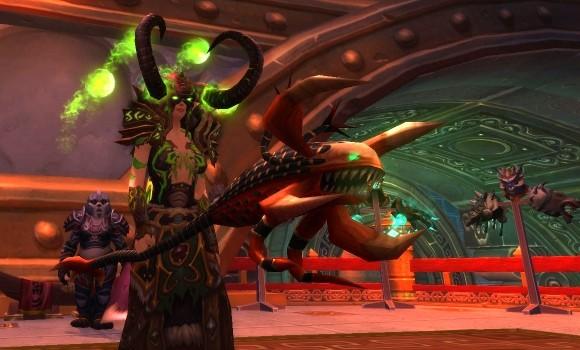 Every week, WoW Insider brings you Blood Pact for affliction, demonology, and destruction warlocks. This week, Megan O'Neill thinks Rygarius rocks at patch-note writing, but we'd still like to summarize it further.

There's a lot of changes besides the usual number tweaking to warlocks in patch 5.4. We'll wrap up the say before patch with a loot list, but here's a prose version of what the patch notes mean before we get into the shiny gear drops.

Overall, there's probably a small nerf in damage since heavy movement fights will affect us once again. Our damage is shifting to our DoTs primarily with some support either from fillers on the move or a twist on our Dark Soul cooldown, depending on the level 90 talent we choose. Since the RPPM system has been tweaked a little to account for haste affecting not only proc bonus but proc chance, we also may see a shift from haste gearing to more solid mastery gearing, also since mastery for all three warlocks boosts damage done in our top damage spells.

But check after the break for more specific changes.

The Codex of Xerrath will now apply to other fire spells that are not always instantly visible to other classes. The big items you can see from when we previewed it before are the two warlock class mounts, the felsteed and the dreadsteed, and to Dark Apotheosis's Metamorphosis-like wings. The green felfire look will also apply to the Abyssal guardian, Demonic Leap, and the demonic fury glow.

Since our level 90 talents changed up mechanics a little, our tier 14 4-piece set bonus needed to change to match, so instead of affecting Dark Soul, it reduces the cooldown on Unending Resolve by 20 seconds.

PvP warlocks should be happy to know that Howl of Terror is back as baseline for all warlock specs regardless of talent choice. In its place, the conal snare Demonic Breath is a reference to the old Shadowflame spell from demonology.

Fel Armor no longer reduces all damage taken by 10%. While we might see this as yet another jealous slash at our healthy warlock lives, moonkin and shadow priests also lost their similar damage reduction passives.

Fel Flame got its damage buffed and its mana cost nerfed, but the major change is that Fel Flame no longer extends DoTs. Fel Flame is intended to be our on-the-go movement spell (when we don't take Kil'jaeden's Cunning, anyway), but DoT extension would work against PvE's main skill cap of managing DoTs and snapshotting buffs. Sorry, PvPers!

Demonic Gateways are wonderful, but perhaps a little too wonderful. When we brought four warlocks to a heroic Iron Qon attempt, between the Gateways and the four warlock Demonic Circles, only one sorry soul in our 25-man raid was stuck running 100% tornado frogger. Our fel-powers go too far when we can completely trivialize encounter mechanics with a class ability.

So while Demonic Gateways are returning to unkillable status, the debuff on using a Gate is increasing to 60 seconds, up from the current 15. (If you have the 4-piece PvP bonus, you can reduce this debuff by 15 seconds.) The threat drop portion of the debuff remains through the whole 60 seconds as far as I can tell. Even though the Gateway threat drop works more like a night elf's temporary Shadowmeld than it does like Soulshatter, remind your tanks about this important debuff.

Unfortunately, the nerf to Gateways will not only lower the need to stack warlocks in a raid, but it will lower our abilities to troll people who still trust us with their lives. After the great Warlockgate incident one Iron Qon night where all three of our warlocks placed our gates inside the windstorm, my guild's healers have all sworn off ever using a Gateway again. The melee, however, still seem to place too much faith in us not placing down the Gates mid-maze phase on Durumu.

We still have one week left to spend all control stones in a player's inventory during raid break by chain-gating them back one or two boss rooms. Go forth and troll others who dare to group with you while you still can!

Some glyphs were changed completely into new glyphs......and a couple of glyphs were just altered a little:Meanwhile, our talents got changed up quite a lot. Let's go at it by tier:

Tier 1 / Level 15: Soul Leech will activate from Shadowburn, but Soul Leech overall is nerfed to cap out at 15% of our maximum health rather than our old 100%.

Harvest Life is no longer AoE Drain Life, but a passive talent that increases Drain Life's damage and healing done, including what you get when you Soulburn it.

Tier 2 / Level 30: Since Howl of Terror is baseline, Demonic Breath is a conal snare to replace it in the talent tier.

Tier 4 / Level 60: It's the only tier where nothing is changing. Hooray?

Tier 6 / Level 90: Hoo boy. Let's be unconventional and start from the right.

Mannoroth's Fury (MF) is no longer passive. Activating MF means that for 10 seconds, your main AoE spells increase in size by 500% and in damage by 100%. For affliction, that's Seed of Corruption; demonology has Immolation Aura and Hellfire; destruction will see it in Rain of Fire. MF comes with a 1-minute cooldown.

Kil'jaeden's Cunning (KJC) got the long-expected nerf where we will no longer be able to do 100% everything on the run. This means no more air-soulwells before Ji-Kun, but also no more moving PvP Fears or kiting your pink dino around Horridon after 20%. Kil'jaeden's Cunning is still going to be passive and the snare effect is gone, but it will only affect the major filler spells for each spec: Malefic Grasp for affliction, Shadow Bolt for demonology, and Incinerate for destruction.

Archimonde's Vengeance is now Archimonde's Darkness (AD), and it's completely changed. Now the talent gives our Dark Soul cooldown two charges, much like Conflagrate and Hand of Gul'dan currently work, so you can either space our your Dark Souls or you can hit it back-to-back (no, you can't stack the effect).

Affliction: The gist of the number tweaking is that our DoT damage went up and our filler damage went down. This is partially because of the KJC nerf making fillers harder to get off in modern raiding's love of movement-based encounters. Haunt's damage and buff to our DoTs got buffed as well.

Nightfall will proc off the most recent Corruption applied rather than off however many Corruptions are out there on mobs. This is a slight nerf in the AoE sense, but a slight buff to single-target shard generation.

Soul Swap will now work like the glyphed version where it no longer peels DoTs off a target, but simply copies the DoTs over to the new target. There is no cooldown, so you can swap all fight long if you really felt like it, but you only have 3 seconds to swap, down from the old 20-second exhale.

Demonology: The 30% mastery from the Dark Soul cooldown now applies to the base mastery rather than applying mastery rating. The only number tweak that demonology really got was to the imp Swarm glyph, making the glyph not mandatory for DPSing anymore. Current theorycrafting math suggests that the glyph may actually turn into a DPS loss.

Demonology is still looking to be top for raiding, especially since it can continue to work around movement with Touch of Chaos rather than needing to take KJC to compensate. The only problem is that some of the trinkets don't scale with pet damage currently.

Destruction: Rain of Fire has a reduced chance to generate burning embers, reducing the need to use the spell in a single-target situation. The spec got the most recent patch note that was announced by Twitter (but wasn't on the patch notes as of August 27th) that Chaos Bolt is going to be buffed by 15%.

The damage buff is intended to help out with the loss of 100% KJC, as destruction is the most heavily affected out of the three warlock specs by heavy movement. The devs contend that destruction's skill cap includes making decisions like where you can squeeze off an extra cast before moving again, but many players remain unconvinced that destruction will be competitive with the other two specs in raiding tier 16.