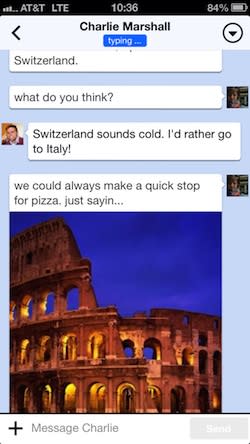 Update: The app formerly known as Ping has been renamed thanks to some trademark disputes; it's now called Hop, and is available in the App Store. Access to the back-end service is by reservation for the time being.

If a product is really hard to search for online, it better be pretty intriguing; the upcoming Ping app fits the bill. No, it's not a relaunch of Apple's ill-fated iTunes-centric social network for music fans; it's an iPhone app that wants to make your email experience as fun and interactive as instant messaging.

Developed by Israeli entrepreneurs Erez Pilosof and Guy Gamzu, the app aims to deliver the fun and engagement of person-to-person messaging without breaking the underlying email metaphor. Ping is launching as an iOS app on September 18, with Android and web versions to follow later in the year.

Pilosof was a founder of Walla, an early web email / portal company in Israel that offered a gigabyte of mail storage as early as 2004 -- well before Gmail's bottomless inbox redefined the standard for cloud email providers.

Over the past few months, he's been focused on stepping back and figuring out where email went wrong. "We want to change how email is organized," he told me last week, "and the way conversations are carried through." Rather than a task-driven approach as typified by Dropbox's popular Mailbox app, Ping goes for an IM-style interface, putting people and media front and center for quick, transactional conversations.

Ping's philosophy treats "traditional" email with an engage & supersede approach. There aren't folders or labels, but there are easy points of access to image search ("Use the web like an endless sticker collection," Pilosof suggested) and ad-hoc attachments for doodles, voice annotation and more. "We need to put human conversation back in the center of email if it will ever function properly again," he said. "That means making email fit to how we communicate now by creating a smart, interactive mobile messaging experience." Want a custom alert for a particular email sender, so you know whether or not to pull your phone out of your pocket? Ping's got you covered.

Although Ping emails will work just fine with conventional clients on the other end, if both sender and receiver are Ping-enabled, then the app's real-time features come to bear. Instantaneous message receipt and typing / presence awareness are there, along with voice and video calling integrated with the app. In fact, you get a lot of the features of a messaging app like WhatsApp or Facebook Messenger -- but without the privacy and social graph implications of sharing your mobile number or "friending" your business colleagues or clients. The initial release of Ping will work with the AOL, Yahoo, iCloud and Gmail services.

Ping's feature set includes some sleek UI (a "Couch" toggle to save messages for later, a Cover Flow-esque media browser for images and attachments), but you may have to wait a while past the 18th to get rolling with it. Much like Mailbox's launch experience, the Ping team is taking pre-reservations for activation to manage the load on the company's servers.

In this article: email, features, gmail, iOS, iPhone, mailbox, messaging, ping, pingapp
All products recommended by Engadget are selected by our editorial team, independent of our parent company. Some of our stories include affiliate links. If you buy something through one of these links, we may earn an affiliate commission.