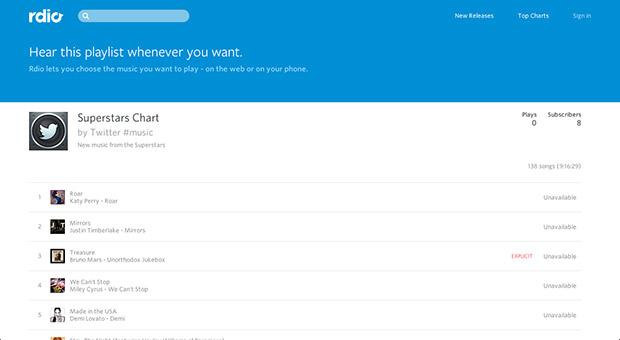 Twitter #Music might've released a Spotify app first, but that doesn't mean it's forgotten you folks on Rdio: you can now listen to all the tracks that rank on the social network's charts from within the internet radio's website or app. The songs are segregated into genre playlists -- just head over to the Twitter #Music station linked below to access and subscribe to them if you're inclined to keep abreast of what's trending. If what's hot with Twitter users don't exactly suit your ears, however, you can always discover new music via Autoplay or take advantage its Station Tuning feature instead.

In this article: app, InternetRadio, music, rdio, twitter, twittermusic
All products recommended by Engadget are selected by our editorial team, independent of our parent company. Some of our stories include affiliate links. If you buy something through one of these links, we may earn an affiliate commission.