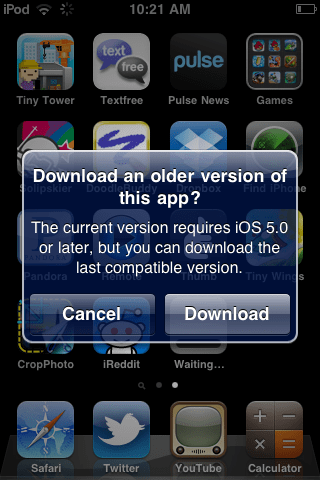 Apple has begun offering owners of older iOS devices the "last compatible version" of apps that will run on their device, as noticed by Reddit members. For example, if an iPhone 3G owner tries to download the latest Twitter app, a dialog box will pop up alerting them that the most recent version of the app is not compatible with their device, but they can opt to download the last version that will run.

We've successfully installed an older version of Instagram to an iPhone 3GS with iOS 4.3.3 and Twitter to an iPhone 3G running iOS 4.2.1. Although Instagram was "out of date," the last compatible version of Twitter (featured above) was version 4.3.2, and hit the App Store back on August 18th, 2012.

It's a smart move, as older iPhones are resold around the world and often stay in use years after Apple stopped selling the device. This allows those owners to have access to apps that run efficiently on those devices, which helps with the overall user experience and Apple's ecosystem.

In this article: app store, AppStore, iOS, iPhone, itunes, sales, software
All products recommended by Engadget are selected by our editorial team, independent of our parent company. Some of our stories include affiliate links. If you buy something through one of these links, we may earn an affiliate commission.
Share
Tweet
Share