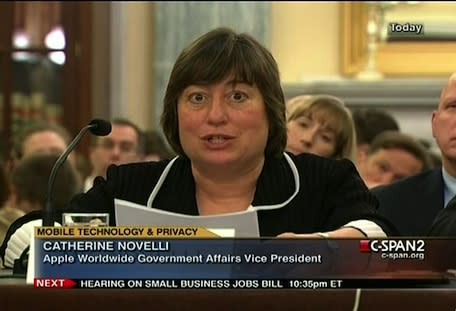 Apple's Vice President of Worldwide Government Affairs, Catherine Novelli has been nominated by the Obama Administration for the position of Under Secretary for Economic Growth, Energy and the Environment. The news was announced by the White House last night. From the press release:

Catherine Ann Novelli, Nominee for Under Secretary for Economic Growth, Energy, and the Environment, Department of State

Catherine Ann Novelli is Vice President of Worldwide Government Affairs at Apple, Inc., a position she has held since 2007. Previously, Ms. Novelli was a partner at Mayer, Brown, Rowe & Maw, LLP from 2005 to 2007. From 1991 to 2005, she served at the Office of the United States Trade Representative and from 1997 to 2005, she was the Assistant U.S. Trade Representative for Europe and the Mediterranean. From 1985 to 1991, Ms. Novelli served in the Office of the General Counsel at the Department of Commerce. From 1982 to 1985, she practiced law in the Washington D.C. office of Debovoise and Librman. Ms. Novelli received a B.A. from Tufts University, a J.D. from the University of Michigan, and a LL.M. from the University of London.

As the VP of Worldwide Government Affairs at Apple, Novelli is responsible for the company's federal, state and international relations. Novelli's nomination still has to be confirmed by Congress before her new job is official. It's unclear at this time if she will be leaving Apple if she is confirmed.

In this article: Catherine Novelli, CatherineNovelli, government, politics
All products recommended by Engadget are selected by our editorial team, independent of our parent company. Some of our stories include affiliate links. If you buy something through one of these links, we may earn an affiliate commission.
Share
Tweet
Share