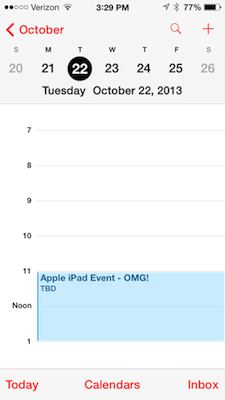 Red alert! Red alert! For anyone who has been anticipating a new iPad or perhaps a Retina display iPad mini, holding out for the release of the new Mac Pro or dreaming about the mythical iWatch -- the wait may soon be over. AllThingsD is reporting that Apple is holding an event on Tuesday, October 22 -- primarily for iPad announcements.

John Paczkowski reports that the new Mac Pro and OS X Mavericks are probably on tap for the meeting, but the focus will be the fifth-generation iPad, rumored to have a thinner and lighter design similar to that of the iPad mini. And of course, the iPad mini might finally see that Retina display we've all been wishing for. Will those new iPads feature Touch ID for fast unlocking? We'll only know when the event takes place.

Paczkowski also notes that October 22 is one day after Microsoft's new Surface 2 begins shipping -- so we're sure to hear some good snark from the Apple executives. It is also the same day as Nokia's Innovation Reinvented showcase. Fun abounds! Your TUAW metaliveblog team will be on hand to provide you with information and commentary as the announcements unfold.

[Update: This was foretold to the world back in September, it seems]

In this article: ipad, ipad 5, ipad mini, ipad mini retina display, Ipad5, IpadMini, IpadMiniRetinaDisplay, rumor, touch id, TouchId
All products recommended by Engadget are selected by our editorial team, independent of our parent company. Some of our stories include affiliate links. If you buy something through one of these links, we may earn an affiliate commission.