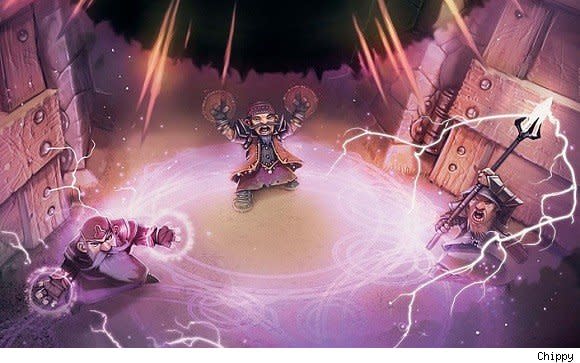 Blizzard began the process of connecting realms a few weeks ago. After two successful connections, Blizzard is finally picking up the pace. Last week, they announced six more pairs that will soon become one. For officers, the weeks before and after a realm connection will be a crucial time. Here are some tips to put your guild in the best possible position within your newly forged community.

1. Don't wait for the connection.

If you intend to recruit from the new population, the time to do so is right after the connection is announced. Players who are looking for guilds on the combined realms will start shopping around immediately. The guilds who are proactive in this phase are more likely to land those players.

Visit the other realm's forums and say hi. You can post a recruiting announcement there, certainly, but you can do more than that. Introduce yourself. Ask questions about the realm you'll be connecting to and get to know the players there. Strike up conversations and become someone that forum users not only recognize, but like and respect. They will be far more likely to consider joining your guild when the time comes if they already know that an officer in the guild is a decent human being.

You can take that one step further and roll an alt on the other realm prior to the connection. There's no better way to get to know a new realm than to play on it and meet the players there "in person."

If your raid or PvP team has been limping along with a diminished roster, it's tempting to view the connection as an all-you-can-eat buffet of new players. But if those players are already in guilds, aggressively recruiting them away from those guilds is a jerk move.

Players do have long memories for these sorts of shenanigans. Heck, I still remember the guild that screwed mine out of one of the rare spawn Dire Maul arena bosses back in 2005.

A connected realm means that a whole bunch of players who have no history with your guild are going to be forming opinions about you. The first few weeks before and after the connection are critical for establishing a good reputation. Don't be the guild that players remember as "the poachers who destroyed my raid team."

3. Encourage your members to be friendly.

Along the same lines, you want to make sure your members are on their best behavior. All it will take for bad word to spread about your guild is one unfortunate incident.

You want to avoid that drama and create the best possible first impression. Ask your members to go out of their way to help players they encounter out in the world, to be informative rather than troll public chat channels, and not to approach new players with an elitist attitude.

Two of the realm connections have been made on Wednesday and one on Monday, even though realm maintenance happens on Tuesdays in the U.S. When your realm is connected, you should plan for extended maintenance on an unusual day.

Post-connection realm performance may not be ideal. On the Boulderfist forums (the first connected realm), I've seen a few players complaining about sudden lag in the wake of the connection. It may be coincidental, but it could also be a result of the new tech.

Until these connections become routine, we really won't know what to expect. Scheduling key guild events like raids on the day of the connection might be a bad idea. In lieu of that, why not --

This is a one-time thing, and for many players on both realms it will be a reason to celebrate. A great way to recruit and build goodwill within the newly formed community is to host an event on the "Day of Joining": hold contests, give away prizes, attack the other faction's cities, etc. Whatever it is, make it a day that players will remember, and they will remember your guild, too.

6. Don't expect a realm connection to solve all of your problems.

A realm connection will infuse your community with new life, but it can't and won't solve everything. For example, the first two connected realms, Boulderfist and Bloodscalp, were both Horde-heavy PvP realms. Players hoping for Blizzard to even the population were very disappointed. In fact, the two realms are now going to be connected to a third realm, Maiev, that is also Horde heavy.

It may be the same for your guild. You may find out that the new combined realm is just as unbalanced as your existing one, and the number of new players is not enough to solve your recruiting woes. Or you may find that new, more proactive guilds scoop up available players before you can.

While the prospect of a connected realm may give your guild hope, it is no substitute for hard work.

For those who have gone through this already, what surprised you? What worked for your guild? What did you wish you had done differently? Tell us below!

Officers' Quarters keeps your guild leadership on track to cope with sticky situations such as members turned poachers or the return of an ex-guild leader and looking forward to what guilds need in Mists of Pandaria. Send your own guild-related questions and suggestions to scott@wowinsider.com.
In this article: building-guilds, connected-realms, featured, guide, guide-to-officers, guild-advice, guild-events, guild-leadership, guild-management, guild-officers, guilds-guide, leadership, officers-quarters, poaching, realms, recruiting, wow-guide, wow-guild-management, wow-guilds, wow-leadership
All products recommended by Engadget are selected by our editorial team, independent of our parent company. Some of our stories include affiliate links. If you buy something through one of these links, we may earn an affiliate commission.