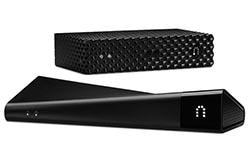 Streaming-media Slingbox devices are going to be getting AirPlay support via the SlingPlayer Mobile app for iPhone and iPad.

According to the company, the feature gives Apple TV customers the ability to watch their home TV on a second TV inside the home (without needing an additional set-top box) or on a remote TV. Slingbox 500, Slingbox 350, Slingbox PRO-HD and Slingbox SOLO customers can take advantage of this fully updated and supported feature, which is arriving via a firmware update that started rolling out yesterday morning. The update is not automatic, so users must go to their Slingbox settings and select "Check updates."

The company also announced a new "My Media" feature that lets Macs access media on a USB drive attached to a Slingbox 500. Support for iOS is coming soon.

Sling Media was an early player in the video place-shifting business. The first Slingbox appeared in 2005.

In this article: airplay, Apple TV, iOS, Mac, SlimMedia, Slingbox, Video
All products recommended by Engadget are selected by our editorial team, independent of our parent company. Some of our stories include affiliate links. If you buy something through one of these links, we may earn an affiliate commission.
Share
Tweet
Share