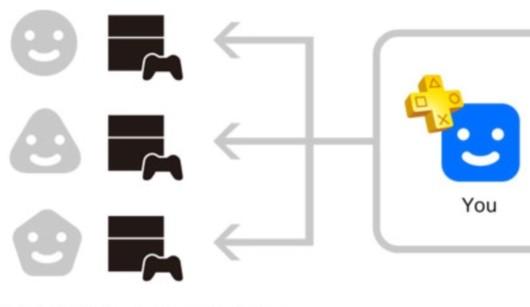 Sharing physical copies of games on the PlayStation 4 may be simple - a claim Sony famously demonstrated with this viral video - but as detailed by the PS4 FAQ, sharing digital games is a bit more complex and restrictive. According to the FAQ, users will need to register one PS4 as their primary system, and on that system, downloaded games can be played by anyone. Users can also re-download their digital copies of games on other systems as long as they're signed into the PlayStation Network, but only that user can start up the game.

Designating a primary console also unlocks several other features, including Remote Play on Vita and the ability to purchase and pre-order content via the PlayStation App and have said content automatically download to your PS4. The FAQ also states that once you've chosen a primary PS4, "you can use up to 2 systems concurrently: the system activated as your 'primary' PS4 system, and one other system."

The FAQ also claims that, if a primary console is registered to an account with a PlayStation Plus subscription, there will be "numerous benefits" available to other users on that system, such as access to online multiplayer. The PlayStation Plus-holding account does not need to be logged in to utilize this feature.

The PS4 FAQ doesn't specify what other benefits for secondary users PlayStation Plus offers, or if the features mentioned will be enabled with the PS4's day one patch. Maybe Sony is saving that answer for FAQ Part 2: Electric Boogaloo.
In this article: faq, playstation, playstation-plus, ps4, sharing, sony
All products recommended by Engadget are selected by our editorial team, independent of our parent company. Some of our stories include affiliate links. If you buy something through one of these links, we may earn an affiliate commission.