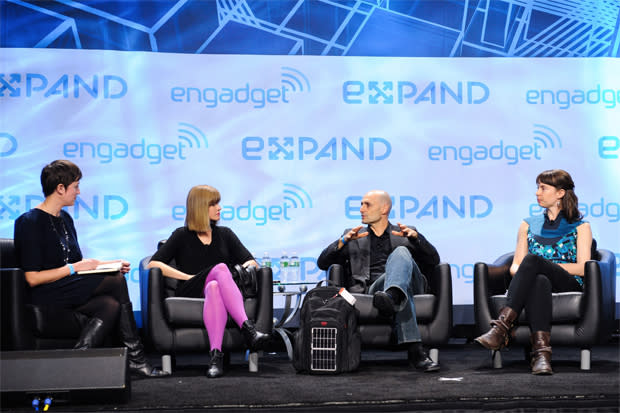 The green message has never been stronger. It's something that we all play a part in, even more so as lovers of technology. What can we do, as consumers, to make sure that we minimize the impact we make on the environment? Greener energy is an obvious choice, but there's also the issue of conflict minerals, which has never been more relevant to technology. Speaking at Expand NY today, Jill Fehrenbacher (Inhabitat), Shayne McQuade (Voltaic) and Beth Ferguson (Sol Design) expressed the challenges they, as industry players face and how that affects every one of us.

We're still a long way away from the fully solar home. But, cheaper panels do mean that solar is increasingly viable as a greener power solution. Ferguson's work with interactive renewable energy projects means she's acutely aware of the challenges that solar adoption faces, but she also believes it's an exciting time to be a designer, citing developments like frameless panels and "solar mosaic" community power-sharing schemes.

McQuade thinks that the real opportunity is the third world. The promise of a solar future for developing nations is nothing new, but McQuade claims a combination of factors such as cheaper panels and a shift toward lower-drain technology means it's a more viable option than ever before. Think of the shift from desktop to tablet computing, and you can see how this suddenly makes more sense. He reminds us that items such as fridges and fans are still too demanding energy-wise for many solar installations, but forthcoming changes to the USB standard -- that will increase its power potential -- mean this, too, could be a problem solar can solve.

The energy source isn't the only issue. Conflict minerals are something that the panel believes is everyone's responsibility. Fehrenbacher demonstrated the point simply, by reminding us that only 1 percent of mobile phones (which often contain such materials) are recycled -- even with multiple monetary incentives to do so. Ferguson was quick to add that not only could we as consumers make better use (or re-use) of products, but also manufacturers need to design their products in a way that makes them much easier to disassemble safely. The problem is a corporate one. Companies like Apple are quick to make a big fanfare about its green data centers, but it also removed its products from the EPEAT green electronics registry. This creates a knock-on effect that prevents colleges and other institutions that want to buy green from buying products they might require.

The bigger problem with conflict minerals, however, is how to know whether they creep into your products. Something McQuade has tried to achieve with Voltaic, but found near impossible due to the number of links in the supply chain. The solution? A dependable certification body. But until that's in place, consumer and corporate vigilance is required.

In this article: expandnyc, expandnyc2013, green
All products recommended by Engadget are selected by our editorial team, independent of our parent company. Some of our stories include affiliate links. If you buy something through one of these links, we may earn an affiliate commission.