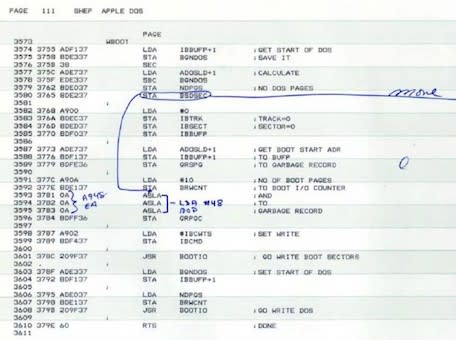 With Apple's blessing, The Computer History Museum and the Digibarn Computer Museum have released the 1978 Apple II DOS source code. The code was originally written in just seven weeks by Paul Laughton, who was a programmer Apple contracted from Shepardson Microsystems. The Apple II DOS was written on punch cards and for his work, Laughton received a sum of $13,000. According to Laughton:

"DOS was written on punch cards. I would actually hand-write the code on 80-column punch card sheets. A guy at Shepardson named Mike Peters would take those sheets and punch the cards. The punch cards would then be read into a National Semiconductor IMP-16 and assembled, and a paper tape produced. The paper tape was read into the Apple II by a plug-in card made by Wozniak, and I would proceed to debug it. As the project got further along and the code was all written, and it was debugging and updating, I would mark up a listing and give it to Mike Peters who would then change whatever was necessary and deliver me a paper tape and I'd start again."

The Apple II DOS source code is now free for all to download and use (for non-commercial purposes). For a complete history of the source code from creation to its public release, be sure to check out Len Shustek's piece at The Computer History Museum's website.

In this article: apple history, apple II, source code
All products recommended by Engadget are selected by our editorial team, independent of our parent company. Some of our stories include affiliate links. If you buy something through one of these links, we may earn an affiliate commission.
Share
Tweet
Share