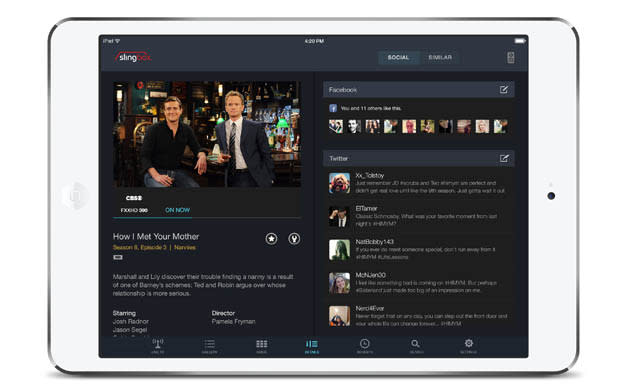 Sling only refreshes its TV-streaming set-top boxes once every few years, and indeed, the current models only came out 13 months ago. So, it's a bit early for new hardware, but the company has at least been busy making over its family of apps. Today, Sling released an overhauled version of its iOS app (SlingPlayer 3.0), along with a brand new Sling channel for Roku players. Additionally, the company says it's coming out with a Windows 8.1 app, but that won't arrive until December.

Starting with SlingPlayer 3.0, it ushers in a redesigned, split-screen UI, with various filters for finding the shows you want. There's also a bigger emphasis on sports this time out. For starters, it should be easier to figure out what channel a game in on; once you do, you can pull up stats, real-time scores and other factoids you might find interesting as you're following along. You'll also notice some deeper social media integration throughout the app, allowing you to post to Twitter and Facebook as they're watching TV. (Where was this feature when the finale of Breaking Bad aired?) Also, though you could watch shows on your iPad's display, you can also fling it to a TV and use your device as a remote control instead.

As for the Roku channel, you can use your iPhone or Android handset to send live or recorded TV to another TV in the house, so long as it's connected to a Roku box (it's fine if that other set doesn't receive cable). To get started, you'll need to download the Roku channel from the Roku Channel Store. You'll also need either the SlingPlayer Android or iPhone app, if you don't already have it installed. For now, this setup will work with the Roku 3, Roku 2 XS, Roku 2 XD and the Roku Streaming Stick. Starting next week, Sling will also support the Roku 2, Roku 1 and Roku LT as well. So if you've been holding on to an older Slingbox, just sit tight.

In this article: hdpostcross, sling
All products recommended by Engadget are selected by our editorial team, independent of our parent company. Some of our stories include affiliate links. If you buy something through one of these links, we may earn an affiliate commission.