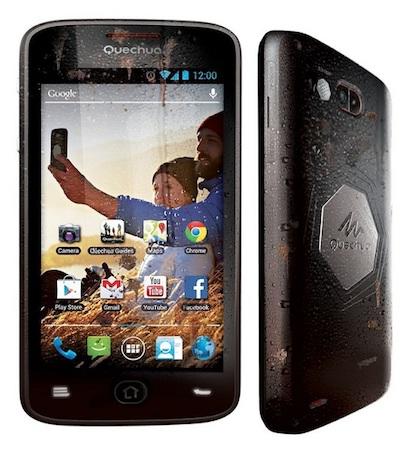 Even though it is a pretty populated world already, Quechua wasn't going to let that interrupt the (rugged) vision for a smartphone of its own. The company, which is known for selling mountain sports gear and equipment, has partnered with Archos to introduce the Quechua Phone, a 5-inch handset with Android 4.1. Aside from packing ruggedized traits such as IP54 certification, Quechua's Phone also features a Qualcomm 1.2GHz, quad-core chip, 1GB RAM, 4GB of internal storage (expandable via microSD), a 5-megapixel rear camera and one rather beefy 3,500mAh battery. Other details like the screen's total pixel count or when/where it'll be up for grabs are still mum -- but we do know the Quechua Phone will be priced at €230 (around $310) once it eventually becomes available.

In this article: Android, Archos, mobilepostcross, Quechua, Quechua Phone, rugged, rugged phone, rugged smartphone, ruggedized
All products recommended by Engadget are selected by our editorial team, independent of our parent company. Some of our stories include affiliate links. If you buy something through one of these links, we may earn an affiliate commission.