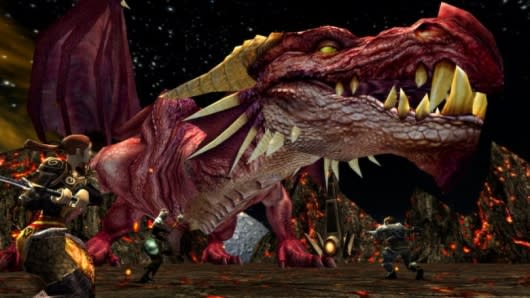 December isn't just a month for frenzied consumerism; it's almost the end of the year and time to start reflecting on what went well, what went badly, and what needs to change. So it's appropriate that the latest producer's letter for Dungeons & Dragons Online focuses on precisely that, looking back at 2013 and counting up the game's big hits and misses. The team feels that Epic Reincarnation and the Storm Horn Mountains were big wins, while the bug-plagued Mabar Festival was definitely a nadir.

But there's no point in looking back if you don't look forward, and the letter does that as well. Four major content updates are planned for next year, featuring a boost of the level cap to 30, two new raids in the dwarven ruins of Thunderholme, a new set of guild airship models, and more beyond that. Take a look at the letter for an exact schedule and more discussion about the year's highs and lows.
In this article: content, ddo, dnd, dungeons-and-dragons, dungeons-and-dragons-online, f2p, fantasy, free-to-play, patch, patches, producers-letter, turbine, turbine-entertainment, upcoming-patches, update, updates, year-in-review
All products recommended by Engadget are selected by our editorial team, independent of our parent company. Some of our stories include affiliate links. If you buy something through one of these links, we may earn an affiliate commission.